In the video you see a false start, then resetting the devices, then recording. The song starts with a fill from the KR-55, then I trigger the MFB 501 on the first beat of the bar. The MFB has a leaky capacitor, and half the time when you press play you get noise (hence the false start). I tap it to get rid of the noise. Once the song is going you see me perform various changes to levels of individual sounds on the KR-55 and the STIX, pressing the fill button on the KR-55 at set points, and muting things in and out on the mixer. You can also hear me sing or count along (so I know where I am in the song). Propped up against the wall is the score:

The KR-55 is supplying the masterclock. Since the KR-55 outputs an s-trig (inverted trigger) it has to go through a clock converter to interface with the other drum machines. In this case I’m using the Korg Mono/Poly synth, which accepts s-trig in and can output a standard trigger. The Mono/Poly is not heard. From the Mono/Poly the clock signal is split (via a Doepfer A180 mult) and sent to (1) the STIX trigger in, (2) a Doepfer A160 clock divider, which sends its /2 output to the MFB 501 trigger in, and its /8 to the DSM200 snare.  From the mixer various audio signals are sent to ring mod, delay and chorus. A stereo mix of these elements is sent to tape tracks (TT) 3&4. 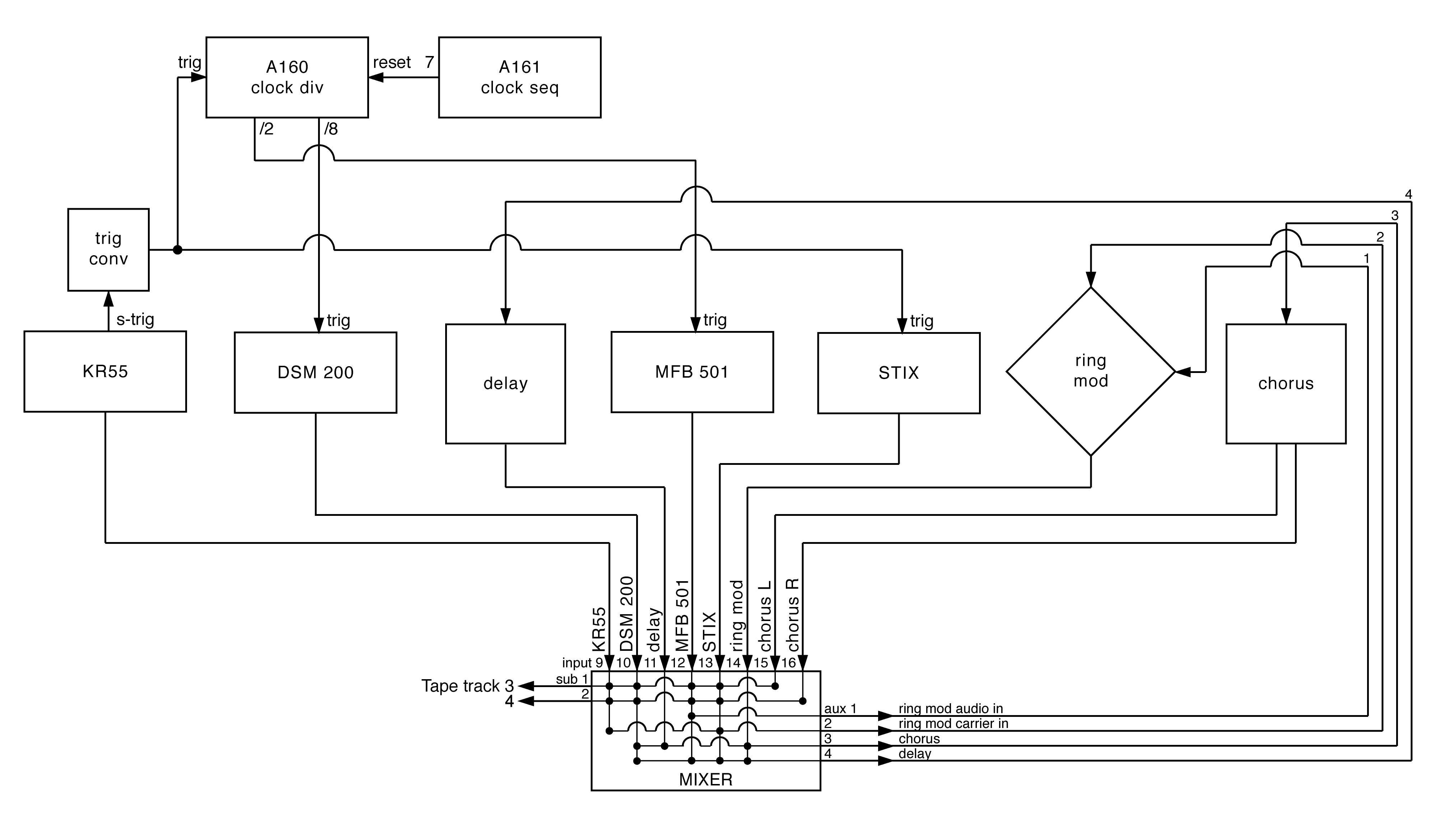 This preset drum machine supplies the main drum beat and the masterclock, and is panned centrally in the mix. It is set to Ballad 2 for most of the song and changes to Ballad 1 for the 3rd verse. Ballad 1 replaces the snare of Ballad 2 with a rimshot. The rimshot sounds a bit like a tennis ball being struck, which fits with the Wimbledon reference in the lyrics. The mixer EQ gives a small cut at 6k, a small boost at 1k and a big boost at 80Hz. 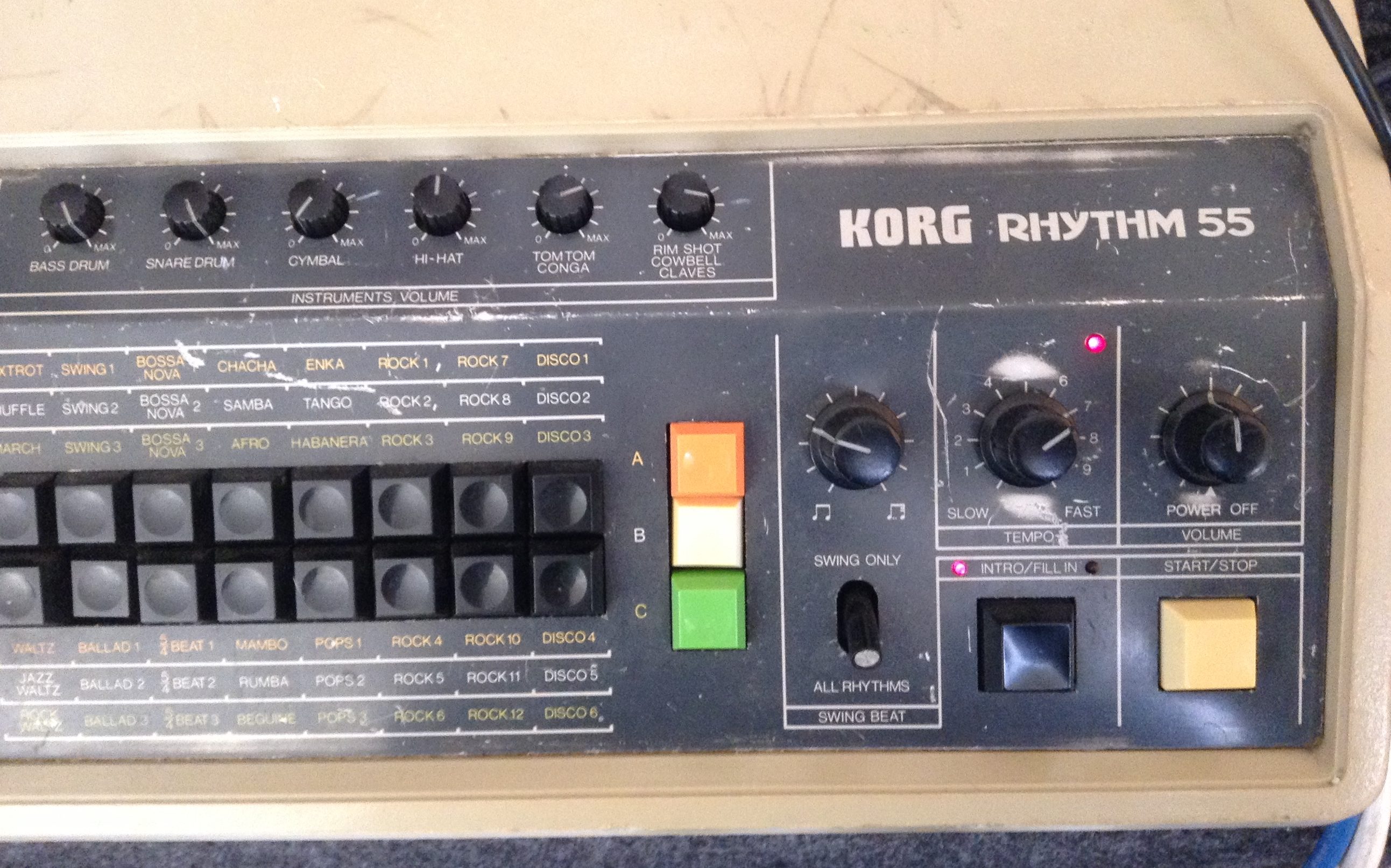 This drum machine is unusual in having degrees of swing. In this case the swing is set just below even triplets, which gives a loping groove that feels right to play along with.

This programmable drum synth supplies the main snare sound for the track. It coincides with, and beefs up, the KR-55 snare.

This programmable drum machine supplies an irregular rhythm that appears in the right hand side of the stereo field from time to time. Its cycle is 16 quavers long, which phases against the 6 (swung) quavers of the main  KR-55 rhythm. 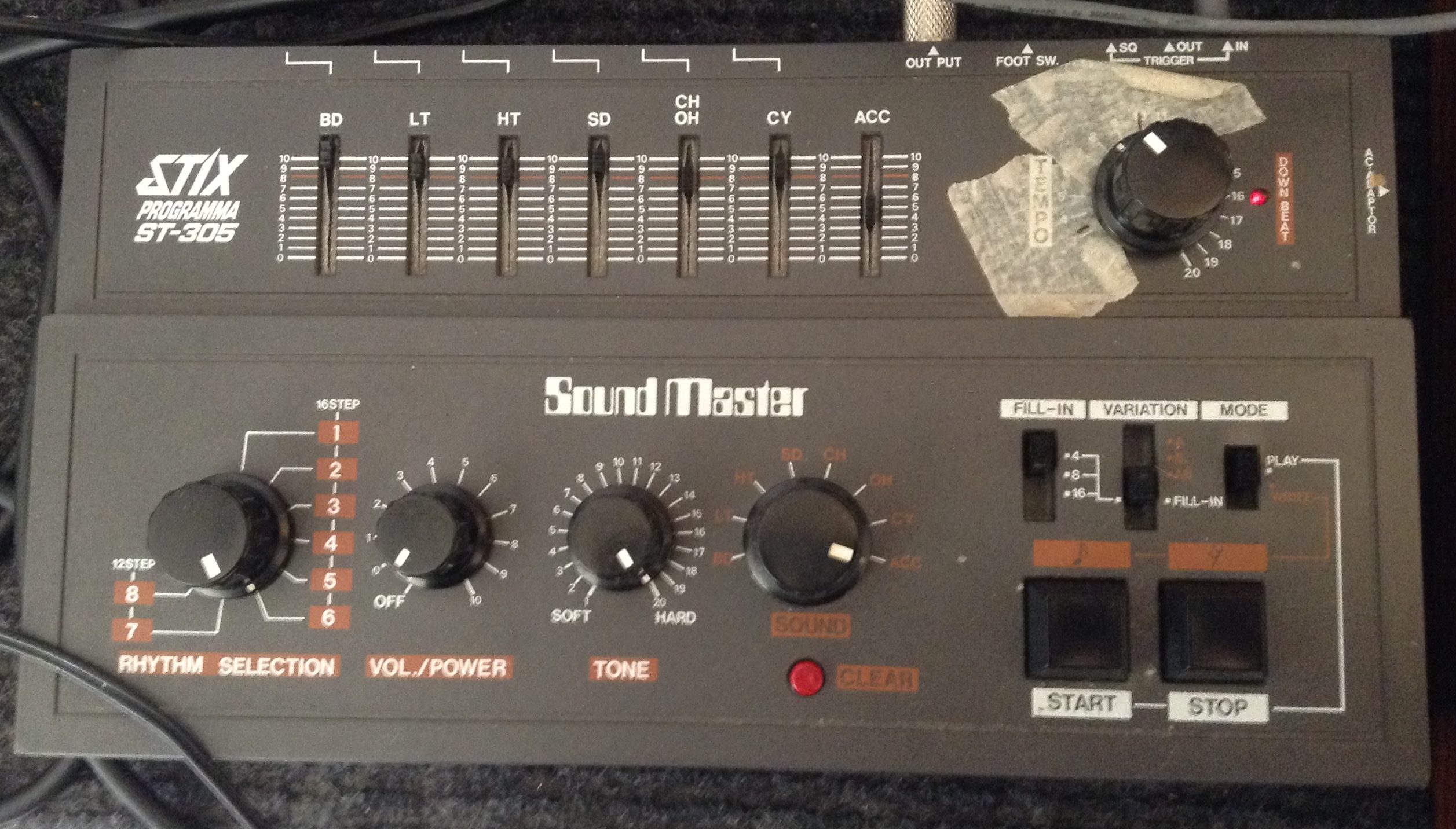 This preset drum machine supplies another irregular rhythm that appears in the left hand side of the stereo field from time to time. Its cycle length is 10 quavers, so it phases against the 6 quavers of the main beat and the 16 quavers of the STIX. Due to the leaky capacitor it operates more effectively upside down. 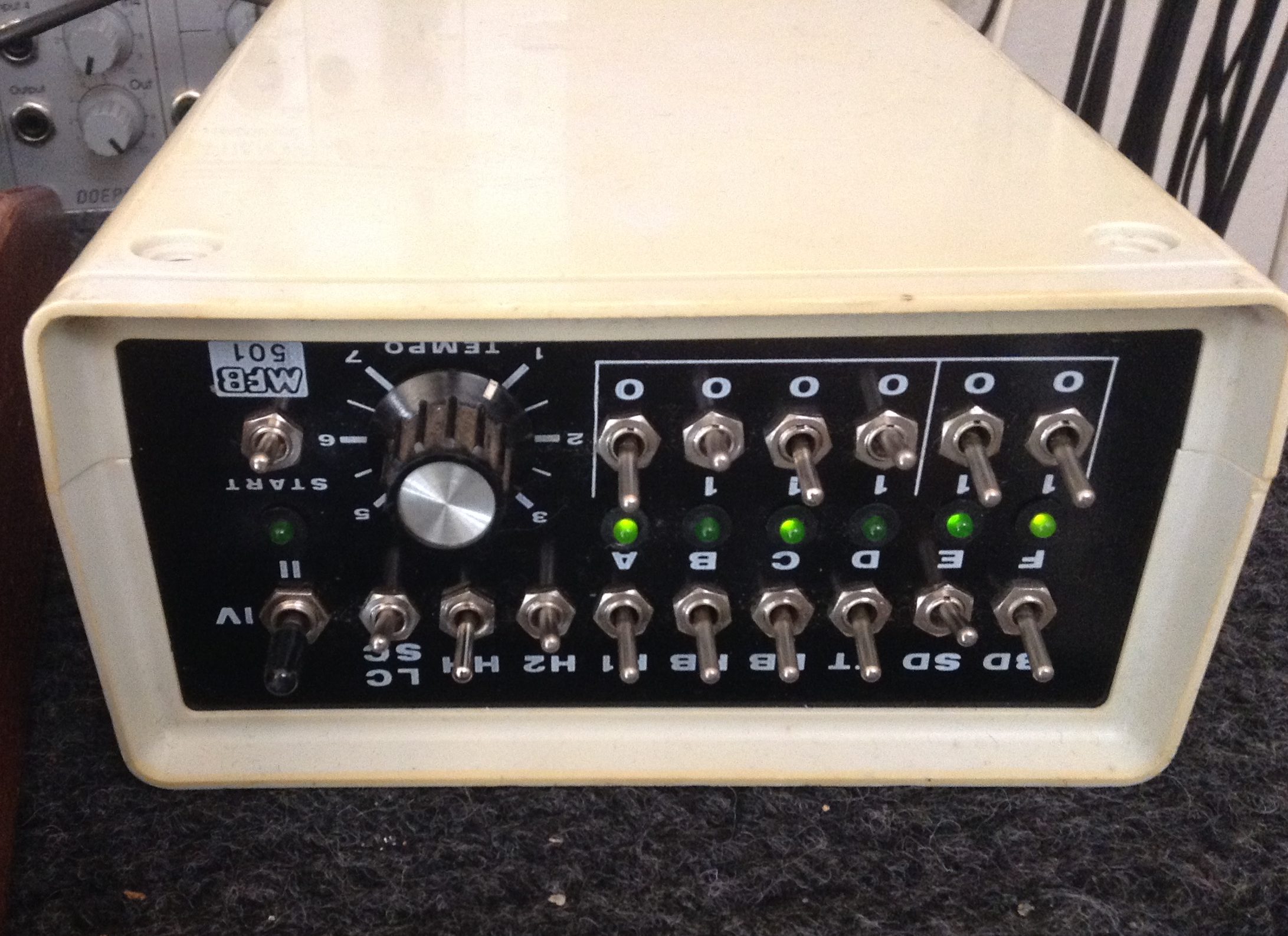 The ring mod takes its audio input from the MFB 501 and its carrier input from the KR-55 and the STIX. It only outputs a sound when these two inputs coincide. Its output is not sent to tape, but is heard through the delay and the chorus.

Very short delay with plenty of feedback. applied to DSM200 snare, STIX, MFB 501 and ring mod. Not sent direct to tape, but heard through the chorus.

In order to record the bass and piano it was necessary to have a guide to the track on tape, so I recorded a Hohner Pianet electric piano to TT5 and a scratch vocal to TT8. These would be wiped later, and are not documented, though you hear them in the next couple of videos.

After a false start (and a quick look at camera to check the framing) this take proceeds nicely until the last section, when I make a mistake. You see me wind back the tape to the gap and then drop-in. The majority of the sound here comes from the Moog Freqbox, which tracks the pitch of the bass and outputs a hard-synced synth sound. There is also some of the original bass signal mixed in on the Freqbox, which outputs to a Moog filter. The filter tames the harsh top end of the Freqbox, and also has an envelope follower, which sweeps the cutoff down on each note. You can see the input and envelope LEDs on the filter pulsing away just to the right of the tape machine. 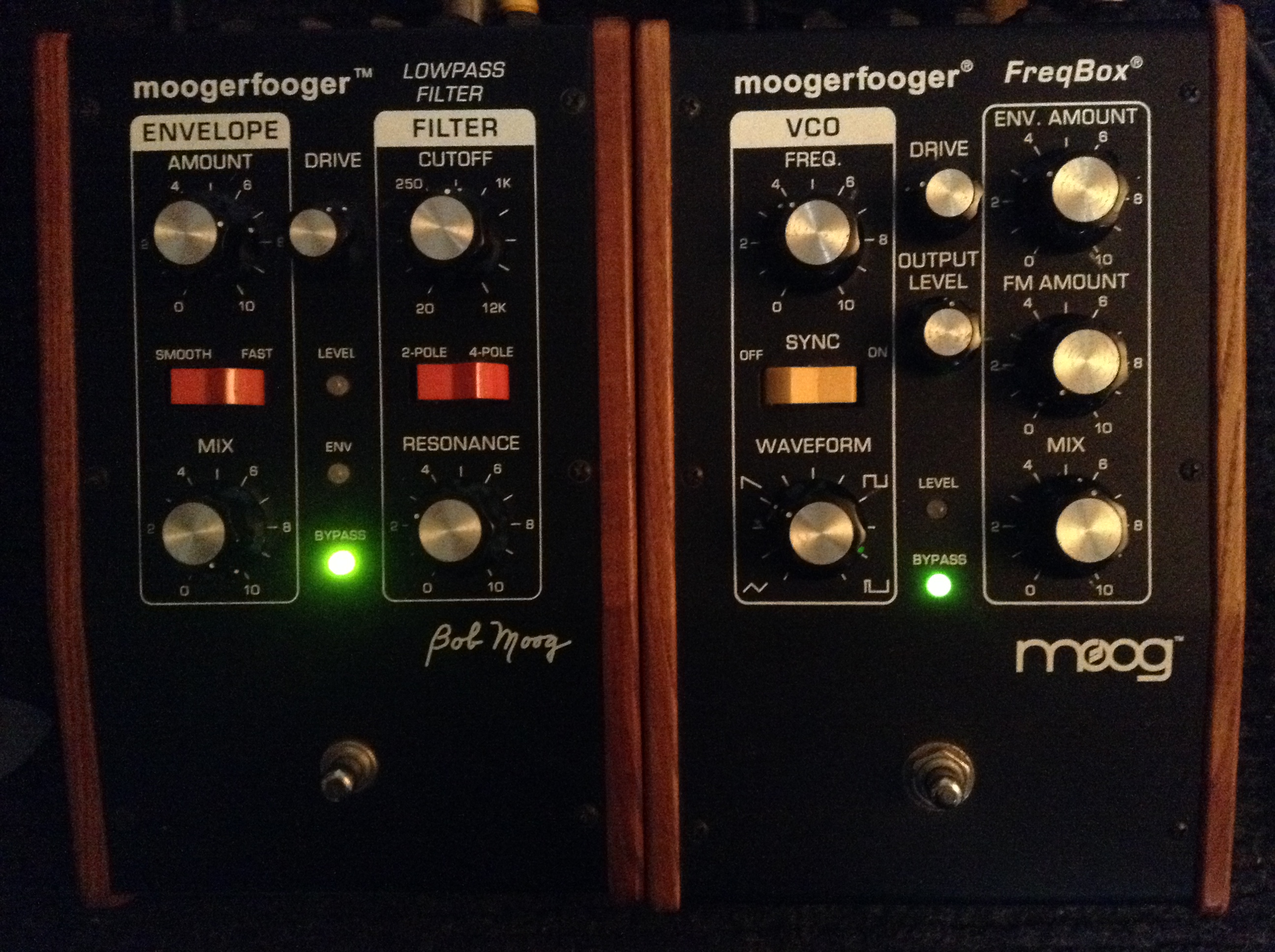 The piano has to be recorded in one pass (no gaps to drop-in), and is quite difficult to play (big sigh after the take).

This double tracked electric guitar part took about three days to set up and record, working on sound and arrangement. I tried various amps, mics, tremelos and boost pedals before hitting on the recording path detailed below. Each of the double tracked guitars had to be played in one go – there were gaps to drop-in, but the piano parts are being simultaneously bounced to the same track as the guitars, and you would hear any drop-ins on the piano. Getting the balance between the guitar and the piano is difficult, and I’ll only know whether this balance works when I get to the mix (by which point it will be impossible to change). Only the first of the two guitar recordings is shown here.

Recording path: Fender Stratocaster to Moog MF-102 ring modulator (used as a tremelo) to a TC Electronics Spark booster pedal (used for the choruses and 3rd verse) to Roland JC77 amp. Sennheiser MD409 mic on amp to Eisen preamp to Portico compressor (heavy compression) to mixer channel 9. From the mixer Biamp spring reverb and Yamaha delay are added, and the guitar, reverb, delay and piano (left for first guitar track, then right for guitar double track) are sent via subgroup 3 to TT2, and then TT8. 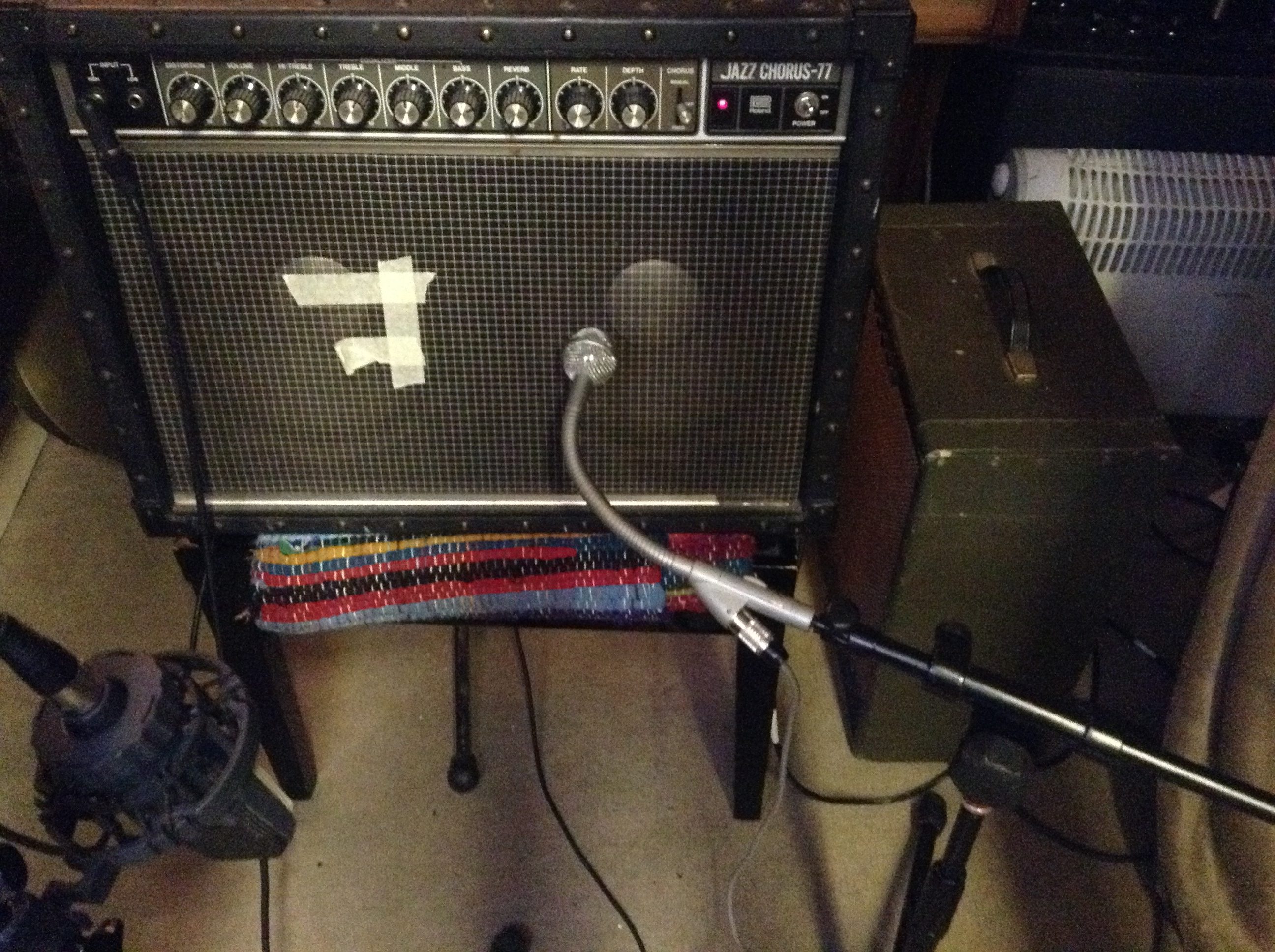 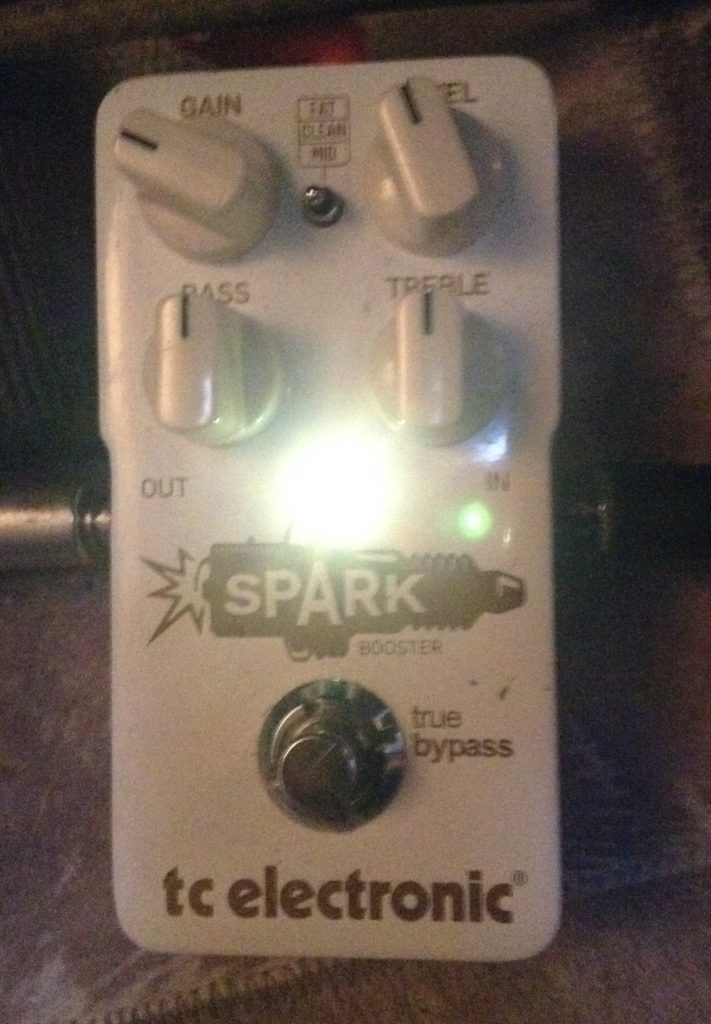 Moving these Moroccan finger cymbals into the mic after striking prolongs the sustain; a kind of pre-mix manual automation that anticipates how these types of sound tend to ‘plink’ and then disappear in the mix. I’m not quite sure what happens at 2:18, but I’m obviously not sure about something, so stop the recording, rewind, listen back, decide its ok after all, drop back in and finish the recording.

The main vocals are recorded in the live room, with the multitrack next to me.

The video shows me double tracking the main vocal to TT6. You can see me drop-in on the vocals near the beginning (left hand on the track arm button while the machine is in record) – this leaves the reverse reverb at the very beginning in place. This is a decent take, but some of the lines were fixed with drop-ins. The first main vocal and drop-ins are not shown here, but follow the standard procedure.

I was delighted when Laetitia Sadier offered to sing backing vocals for me. I’ve known and worked with her for many years and she’s fantastic in the studio.

My studio was not behaving itself very well for this session, and I realised how used I am to working around the various niggles and intermittent problems it manifests. This session put that into sharp focus.

Most of the backing vocals involve a single double tracked line, which Laetitia sang in the live room, while I engineered and gave directions in the control room. For the end section (shown in the video) I needed a high and a low BV, also double tracked, so I sang at the same time as Laetitia (while engineering, and giving directions). This was one of the most challenging processes of the whole recording of the EP.

At this stage the multitrack is full and looks like this:

The performance of this mix follows a score and is rehearsed. In the video you can see various mutes (mostly to backing vocals) and fader rides. At 1:22 (and again at 2:04) I bring in the ring mod effect on the vocal. I also have to get the finger cymbals in at the right volume at various points from their various locations.

Subgroup 2 sends the main vocal to the Freqbox, which tracks the pitch and outputs a hard-synced synth sound to the carrier in of the ring mod, where it is ring modulated with the original vocal. This gives a distorted effect that can be heard in the choruses.

Subgroup 3 & 4 are used for parallel compression applied to a mix of the rhythm tracks L&R and the piano + guitar L&R. Mixer channels 2, 3, 4 & 8 are sent to subgroups 3 & 4, which send via inserts to a DBX 163/463 stereo compressor, set to very heavy compression. The compressed signal is sent to the main mix.