The drums and synth are the first thing to be recorded. The DR-110 drum machine provides the main rhythm. The accent out of the DR-110 triggers the STIX drum machine and the two synths.

Due to the storage limitations of the DR-110 drum machine, the rhythm tracks had to be recorded to multitrack in two separate sections, which were then edited together (see below). The third video (above) shows the setup procedure which zeros each device before recording. 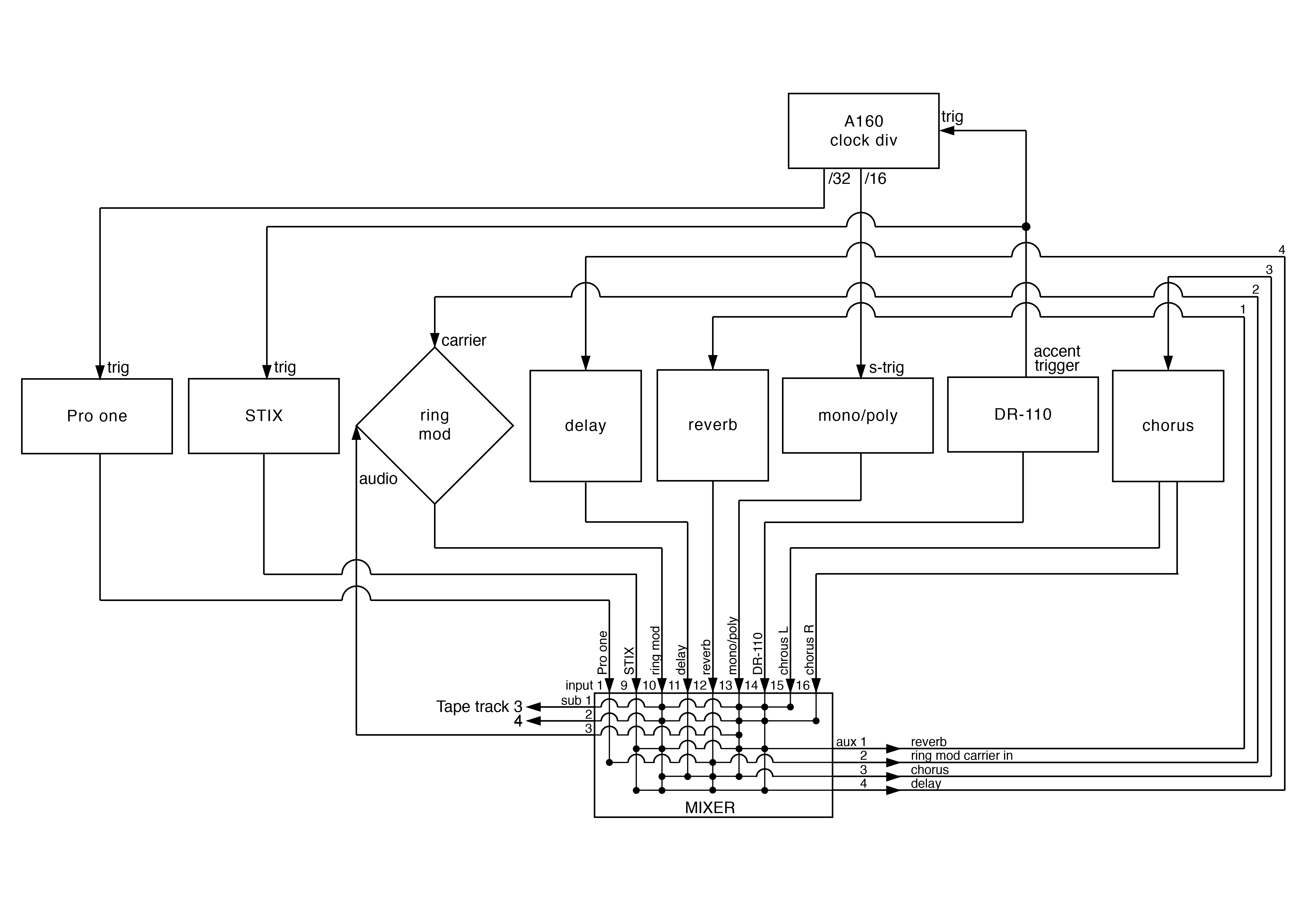 Photo of the studio setup for the recording: 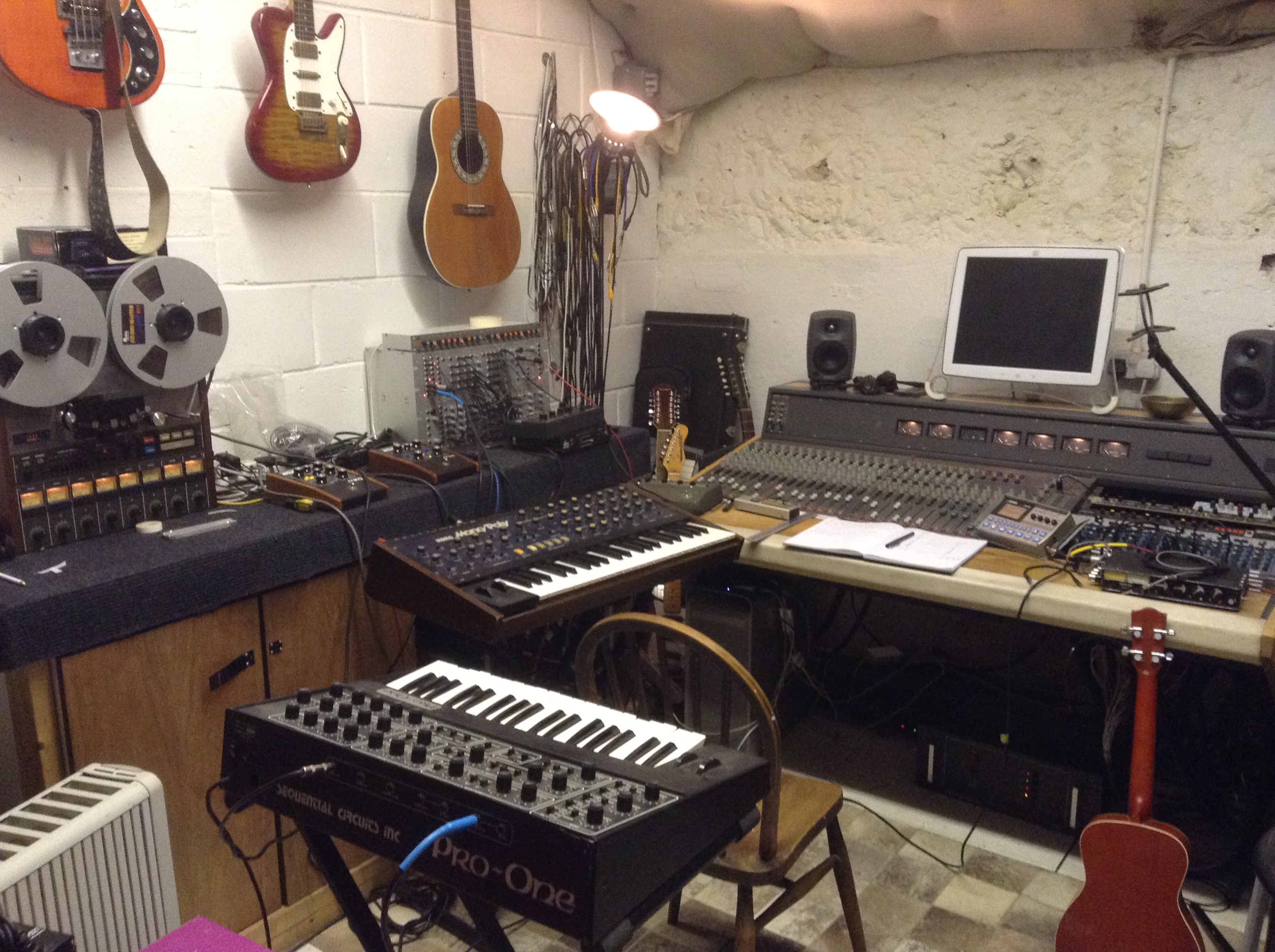 Patch sheets for the patterns and programmed songs

This programmable drum machine gives the main rhythm. The accent trigger output drives all other elements. From the patch sheets linked above you can see that the accent is neither regular nor consistent between the different patterns, so there is an unpredictable element to how the STIX, Pro One and Mono/Poly all follow this clock signal.

Due to the limitations of song memory, and by the fact that you can’t go from song I to song II on the fly, I had to record to two separate sections of multitrack, which then had to be edited together. 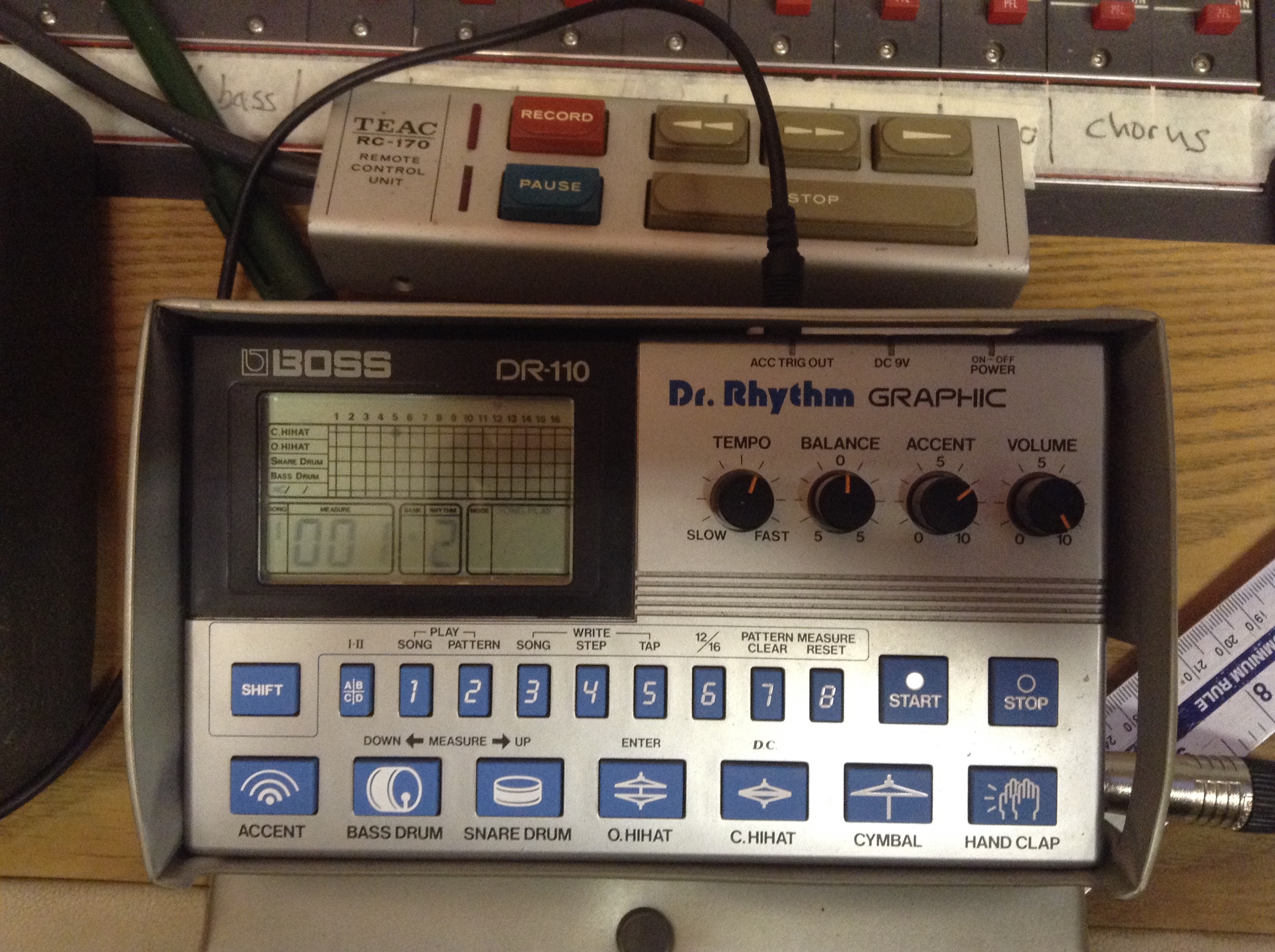 This programmable drum machine is used for extra toms and cymbals. The output is not sent to tape, but through the delay and chorus and then to tape. Due to the irregular clock the pattern is unpredictable. 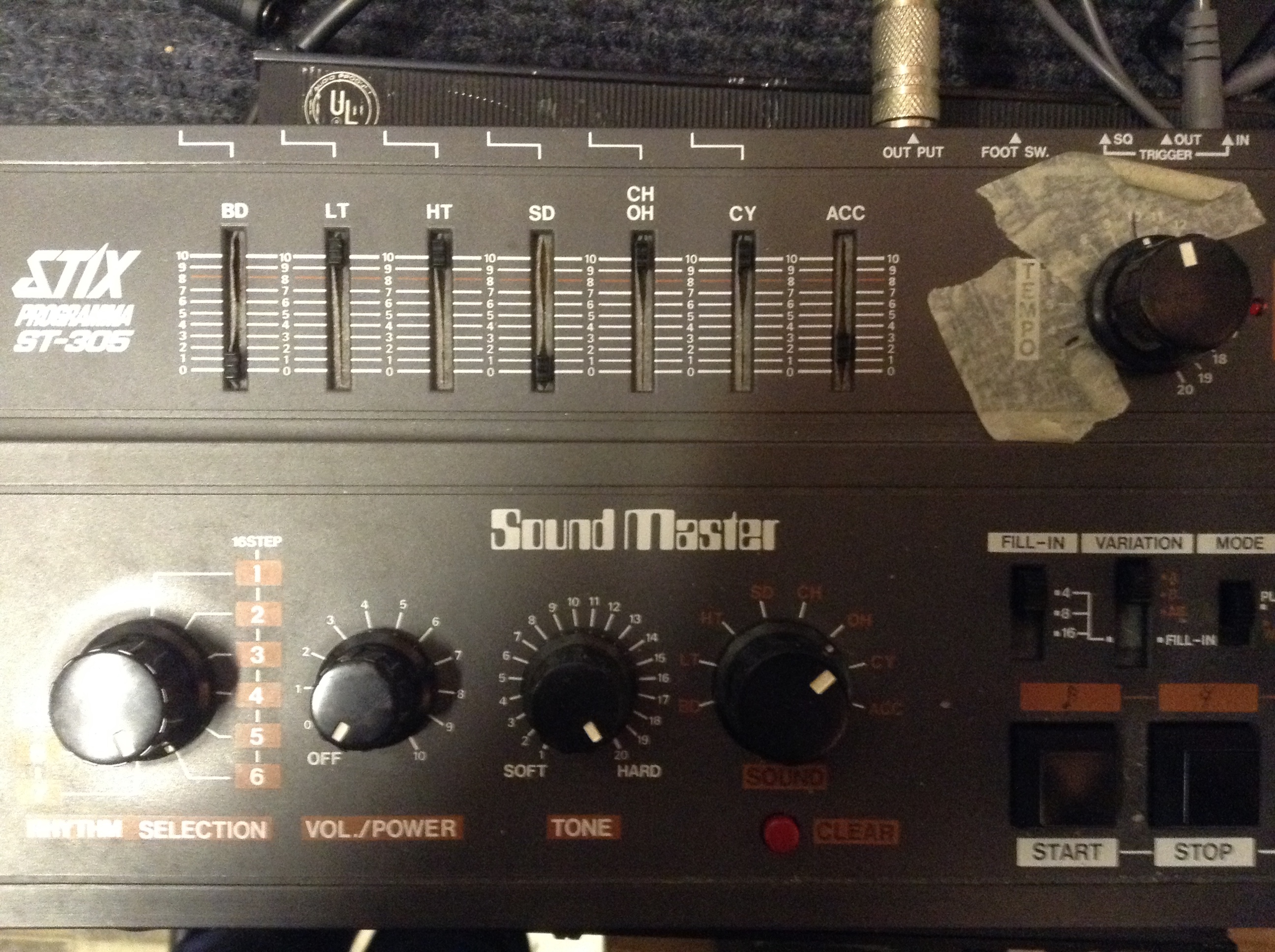 This four oscillator synth interacts with the Pro One through the ring modulator, giving the synth sounds recorded with the drums.

The DR-110’s accent trigger is sent to a clock divider that sends a /16 clock to the Mono/Poly’s arpeggio trigger in. This involves a special cable to convert the signal to s-trig (details on how to make this cable here). In part 1 the arpeggiator is latched onto the notes (from lowest ascending) D A E A F. The envelope is set to a slow attack. In part 2 the chords are played, though only one note sounds at a time. You see this in the second video above. 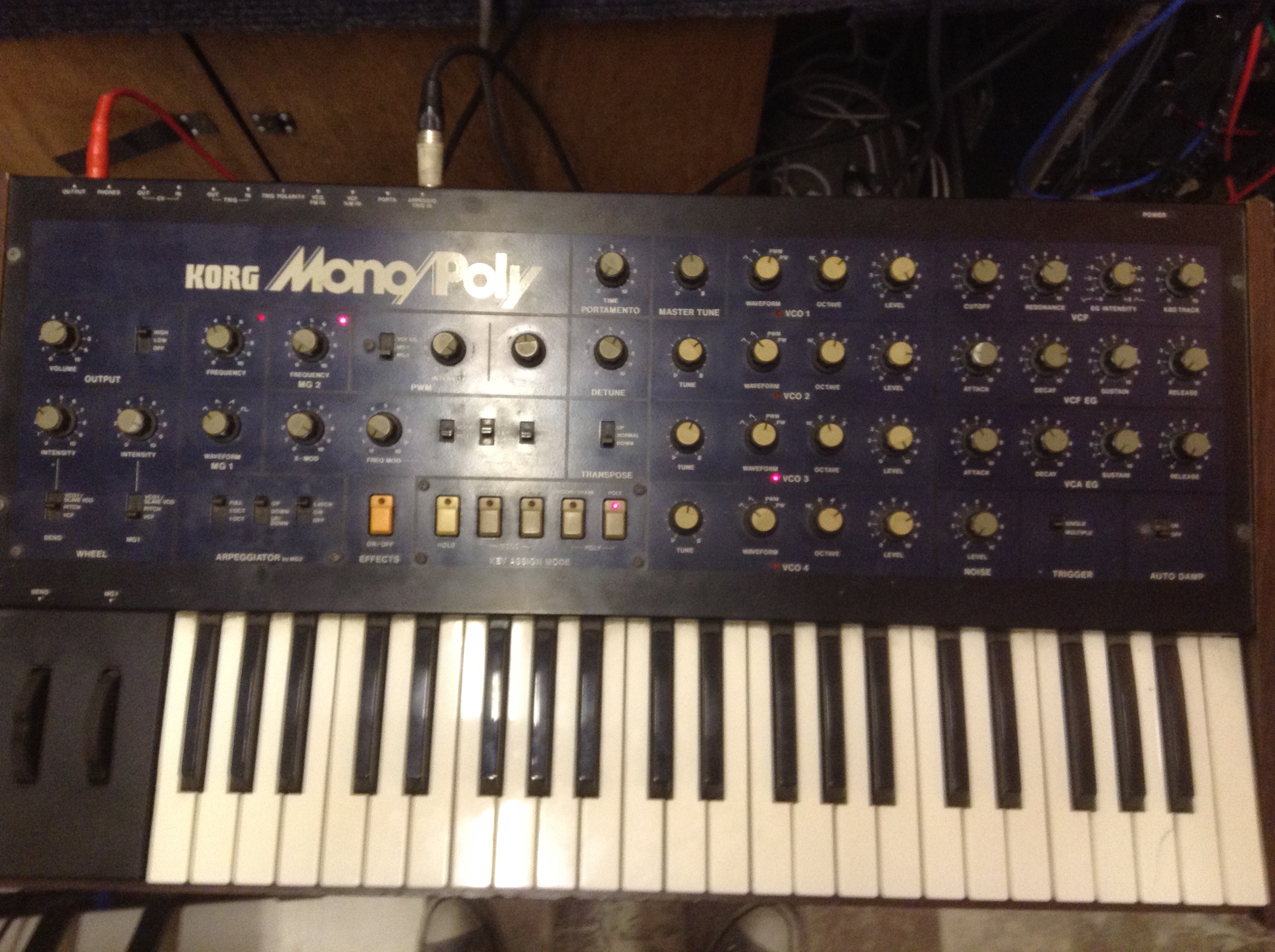 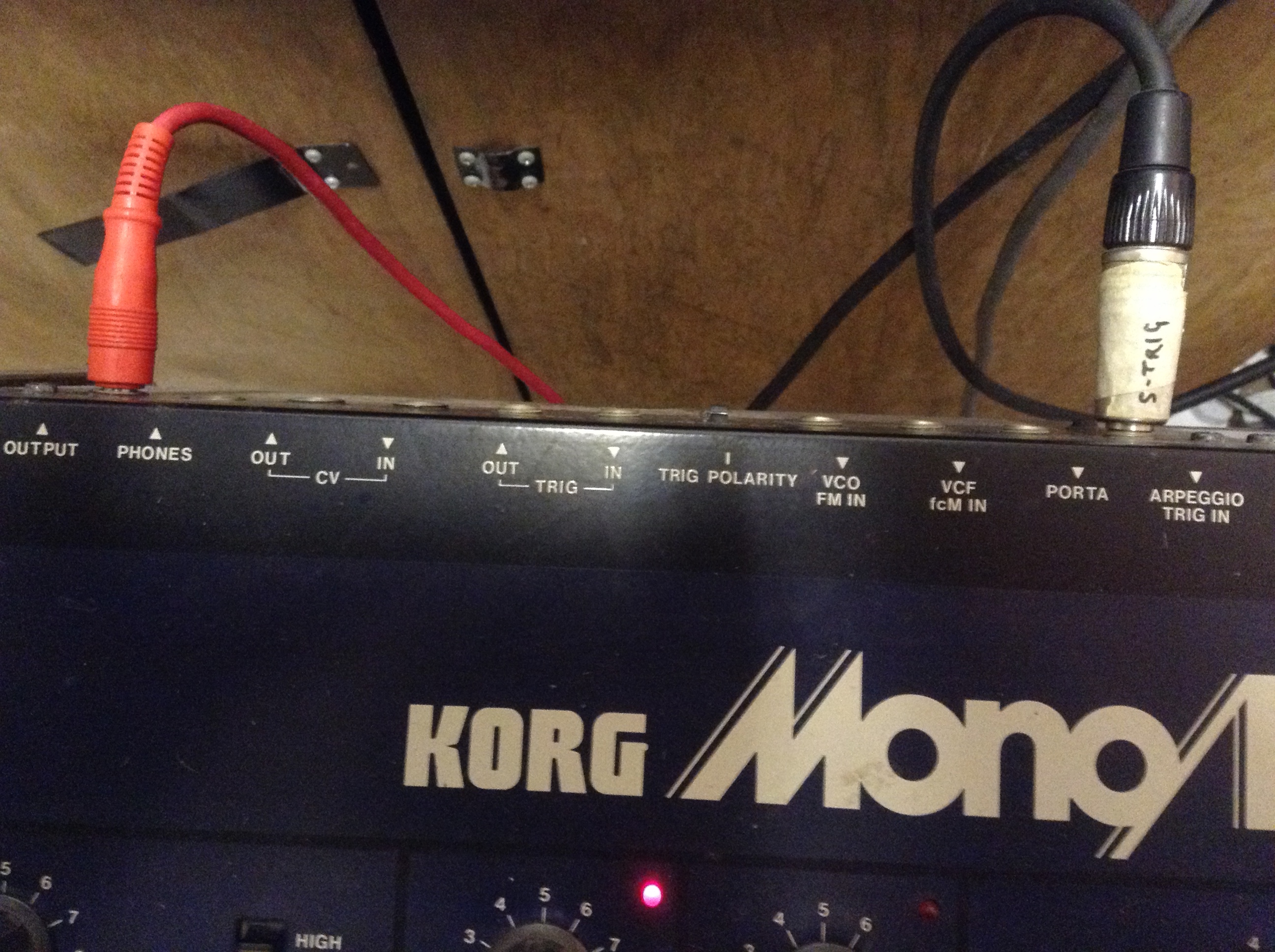 This mono synth is not heard at all, but it forms half of the signal ring modulated with the Mono/Poly. In the first section a fairly random assortment of D A E F in various octaves are programmed into the onboard sequencer. This is triggered by the /32 output of the clock divider. In the second section the second sequencer is programmed with the notes D A F. 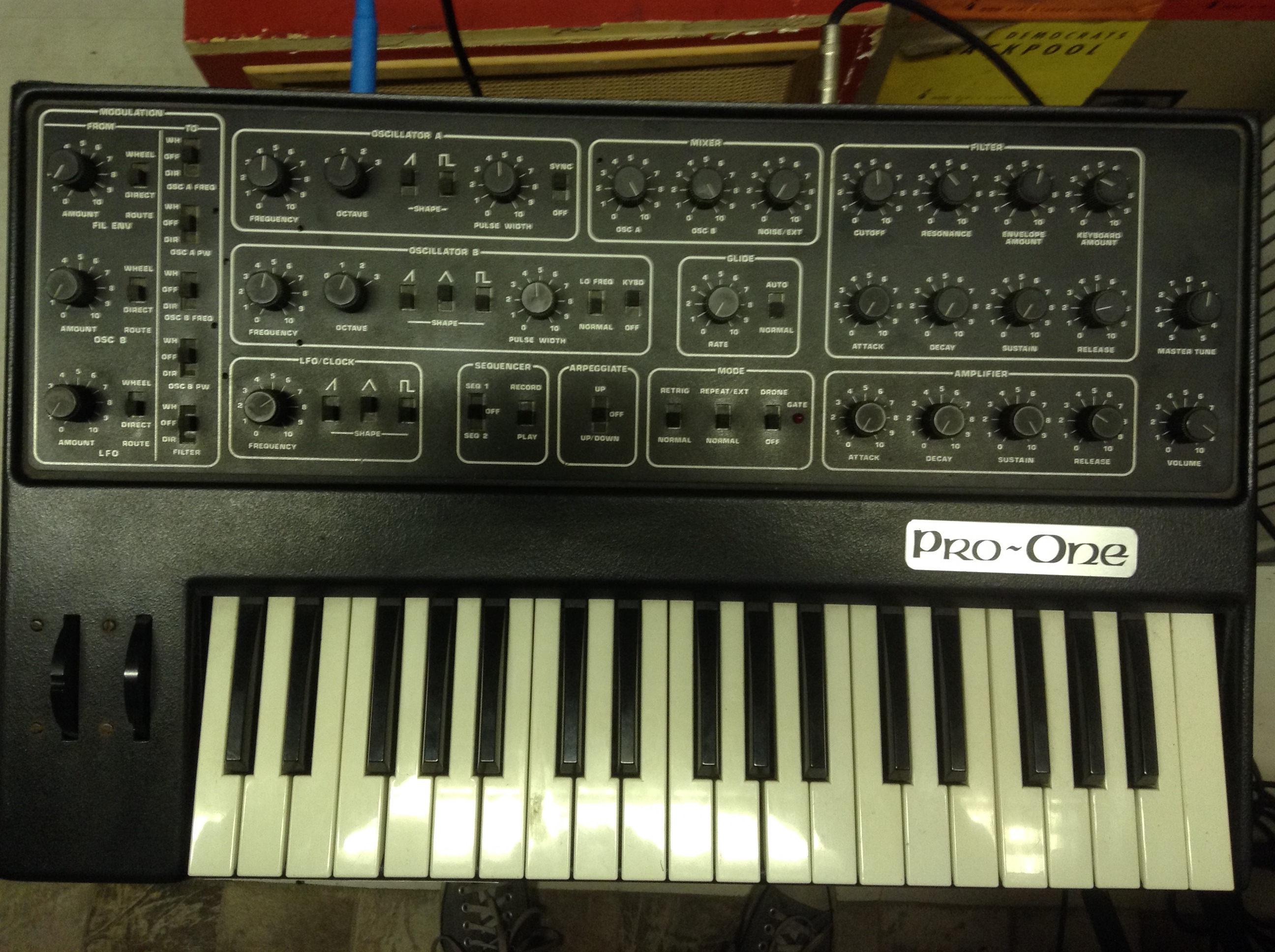 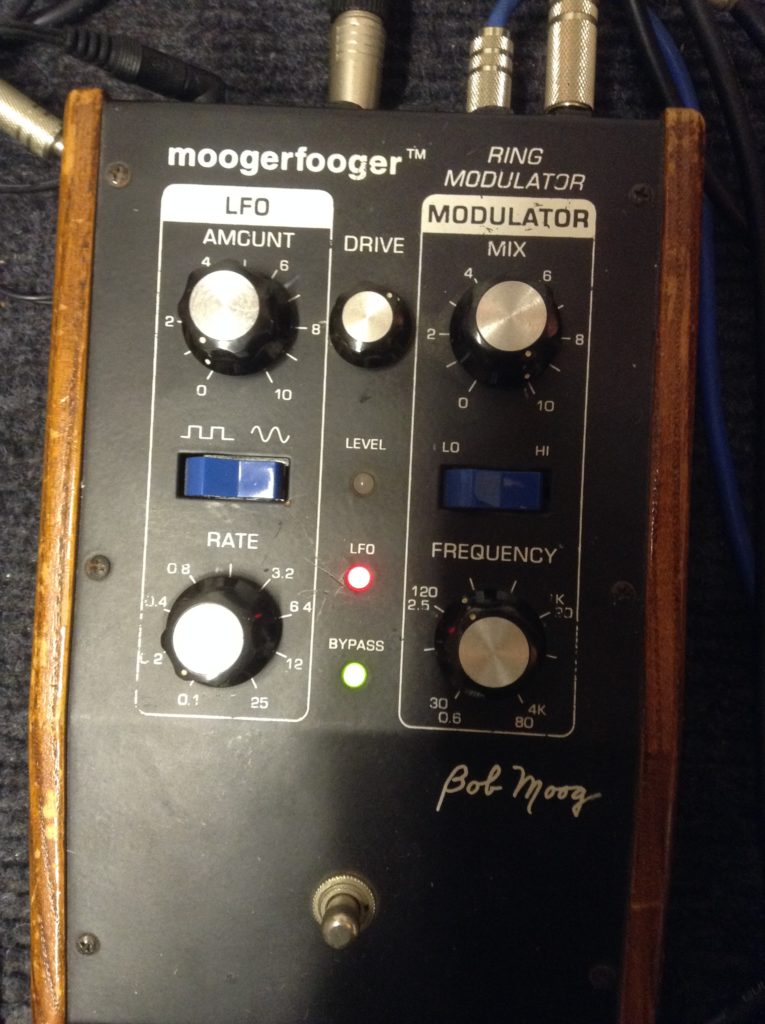 The STIX, ring mod, reverb and DR-100 are all sent to this analogue delay. The output is not heard directly, but is sent to the chorus.

This stereo effect treats the ambient signals and allows sounds from the centre (DR-110 and ring mod) to have a stereo spread. 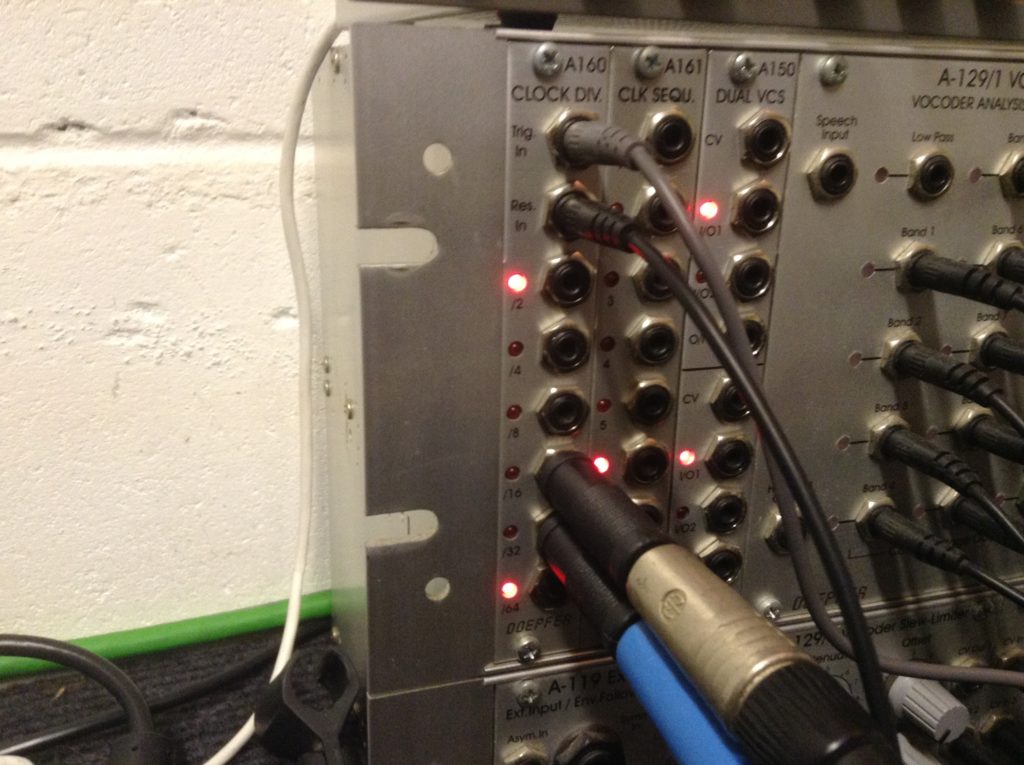 The two parts of the multitrack had to be edited together. I’d never edited a multitrack before, and was quite pleased with how it worked, despite one of the cuts being messy, resulting in a slight gap in the splice (you can see me grimace in the video). It sounded fine and everything else recorded nicely over the edit.

At this stage I had parts for ukulele and the main vocal, but nothing else. I demoed various things in Logic, on top of the digitised drums from tape. I eventually decided to add:

The plan for recording then was:

These are double tracked to TT5 and 7. Has to be played in one pass (no pauses to drop-in). I found this difficult, and both final takes have errors. 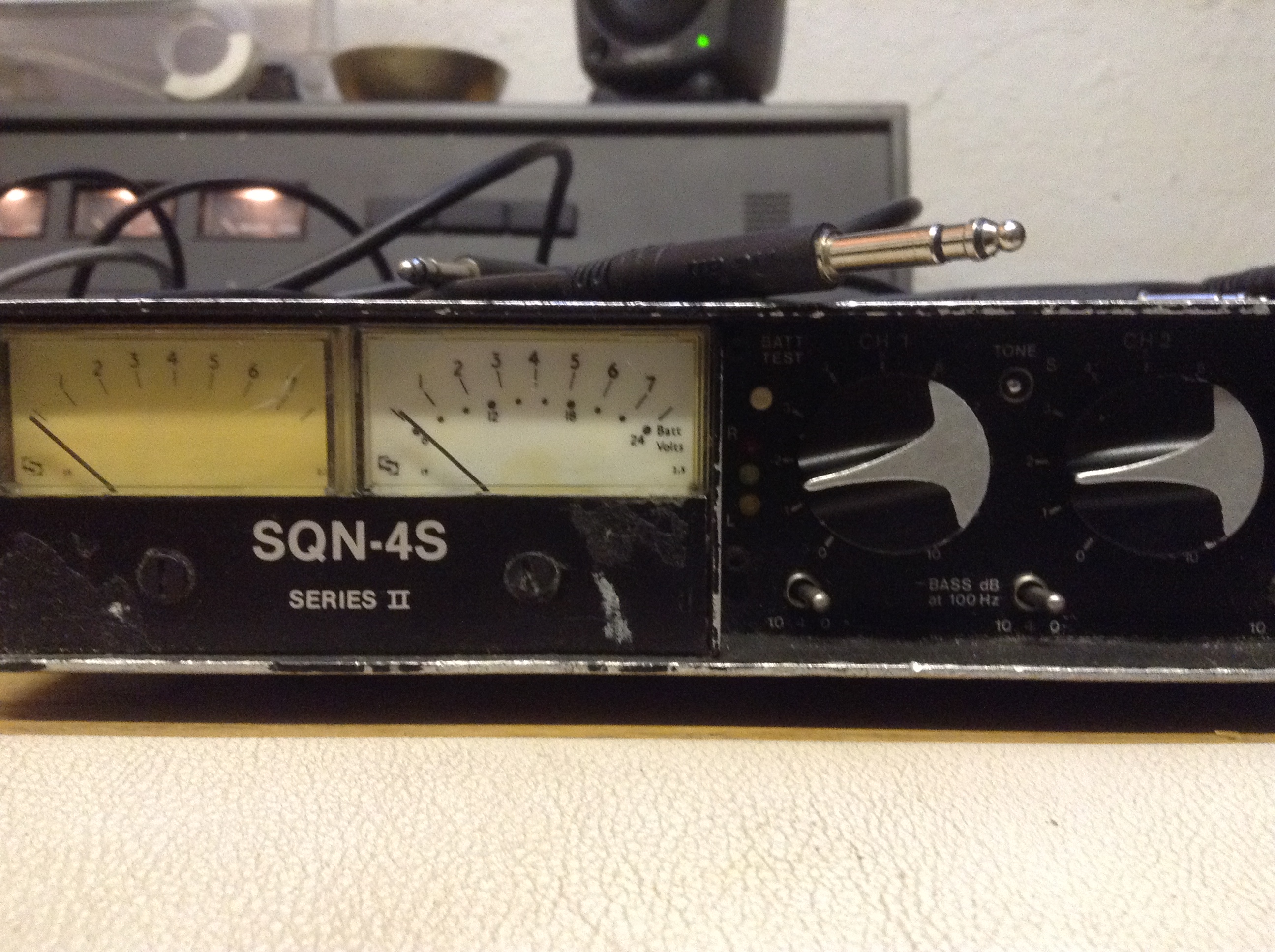 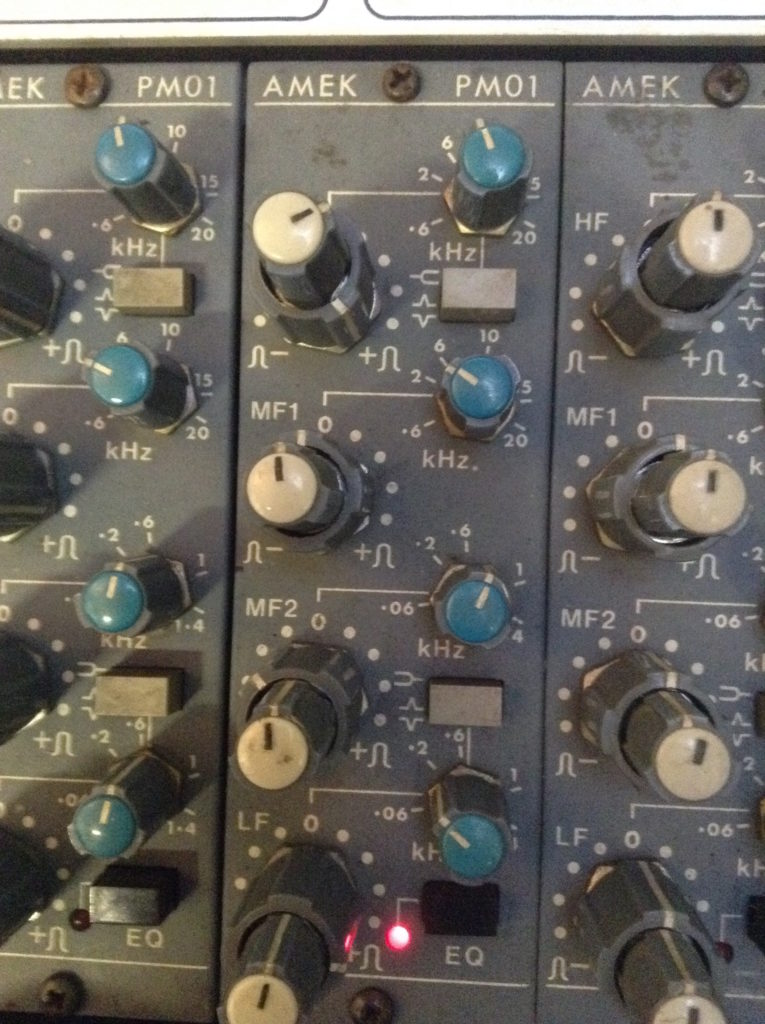 These consist mostly of a single line double tracked, but there are two places with an extra line doubled, so there are four lots of BVs to record. The extra two lines were recorded first to TT6 and 8, then these were bounced with the full BV part to TT1 and 2.

These backing vocals were sung in the live room, with the 80-8 in the control room, and using the 80-8’s remote control to record and drop-in and drop-out (operated by my right hand, below what you can see in the video).

There are some 50 odd videos of attempts at the BVs, which were sung line by line. The one included here gives a flavour of the process: rehearse, record, listen; repeat until there is an acceptable take and either double track or go on to the next one.

The microphone is a Sennheiser MKH406T, but the subsequent recording path is not documented.

You can hear the final backing vocals as I track the guitar in the next video.

Video 1: Take 1. From the top until I make a mistake in the first chorus.

Video 2: Take 2. Leaves the harmonics previously recorded in the first verse and replaces the chorus. Just before the chorus you can see me drop-in on the remote control. I then play on until the end. However, on listening back, I decide there is a mistake somewhere, and because there are no gaps in which to drop-in I have to re-record from the beginning of the second verse.

Video 3: Take 7. Re-recording from the second verse. I make a mistake in the last section.

Video 4: Take 8. Correcting the mistake in the last section.

The guitar is played in the control room with the amp in the live room. 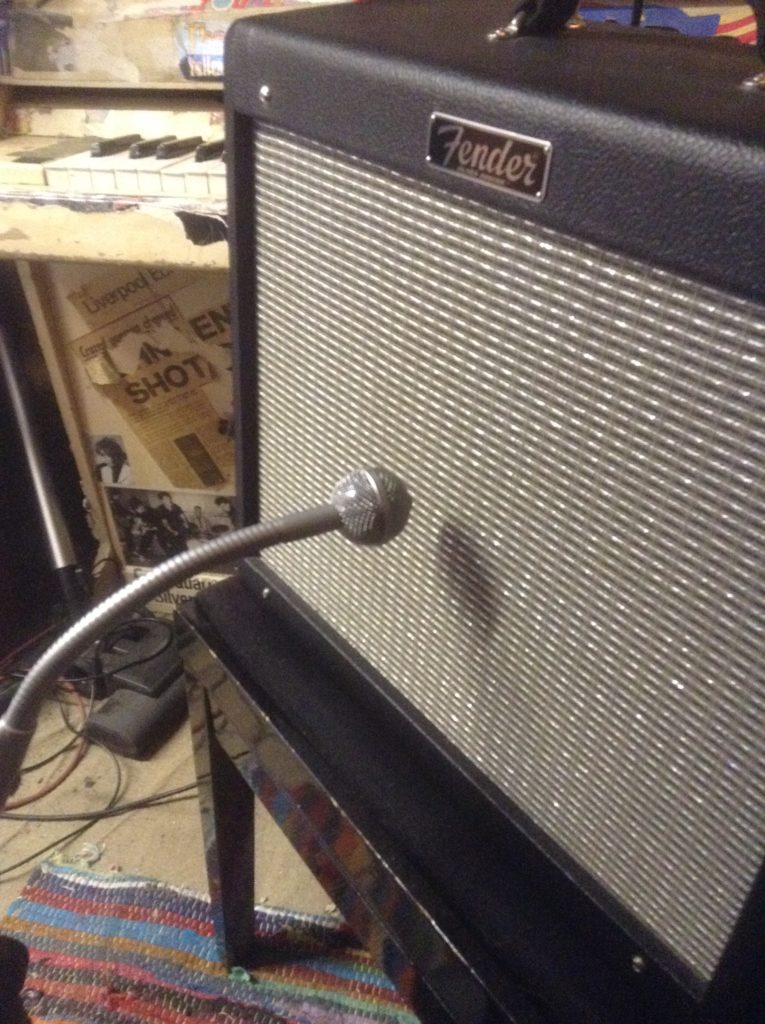 The Baldwin Baby Bison bass is recorded to TT8, at the same time as the guitar is bounced from TT6. The whole thing has to be done in one take. The difficulty is getting the balance between guitar and bass right. I’ll only really know if this will work once I get to the mix. For now I have to second guess. There is no undo with this decision, though, as after this the main vocal recording will wipe the guitar.

The two videos illustrate one of the perils of recording to tape. Video 1 is a complete pass of the main vocal. I listen back and although it’s a pretty good take there are some drop-ins I would like to do. I am very happy with the first line though, which is one of the most difficult to sing. Video 2 shows me starting on the drop-ins, but I don’t realise that the track is armed. I press record and record over the nice first line. I only realise this when I go to arm the track for the next line and find it already armed! It takes me a moment to realise and then I’m horrified at what I’ve done. I now have to re-record the first line, in the knowledge that it may never sound as good as this…

There are too many videos of the drop-in process to present. It follows that of the backing vocals: rehearse, record, listen, evaluate. Repeat or move on.

This time the multitrack is in the live room with me. This is slightly noisier (motor noise from the tape machine), but the drop-in process is much easier to do, and you can get in and out more quickly than dropping-in on the remote control.

With the main vocal recorded the multitrack is full:

The performance of this mix is not scored, though it is rehearsed. There are some level changes on the vocals and bass, but mostly you see me muting the vocals in and out – this is because they are quite noisy in the gaps between singing.