As with all the rhythm ‘beds’ in these songs, the idea is to do as much as possible at the same time, to cut down on internal bouncing, and to perform various elements in order to give the parts variety.

Patch sheets for the patterns and programmed song

At top of song I hit play/stop 9 times – this triggers the first kick drum four times and is used as a count in for subsequent recording.

Main out goes to mixer then to tape track (TT) 2.

Headphone out goes to Doepfer external in (A119a), where it splits to vocoder speech input and A125 phaser.

The tom trigger out only sends a trigger on high or low tom. This goes to A160 clock divider where it is divided by 2 and sent to DSM 200.

Slightly odd pattern and rhythm from /2 of clock divider (from the toms of the 606).

This section uses a Doepfer modular synthesiser, incorporating their vocoder system. In the description below Doepfer modules are named ‘A1xx’.

There are two elements to this stereo pair – the phase shifted TR606 and the Moog MF-107 FreqBox oscillator/coloured noise vocoded by the 606. These two paths are mixed in the A138 and this mono signal is sent to the Boss CE1 chorus that creates the stereo signal that is recorded to TT3 & 4.

The A125 phase shifter is voltage controlled by the amplitude envelope of the 606, generated by the envelope follower in the A119. There is also real-time performance as I play with the ‘shift’ knob during tracking.

The vocoder path is a little more complex: the 606 feeds into the speech input of the vocoder analysis module (you can see the dancing bank of lights in the video); the raw oscillator out of the FreqBox (FB), alternating with coloured noise from the A118, feeds into the vocoder synthesis module. The pitch of the FB is fixed at a low G, and the waveform is modulated manually during tracking. The switching between the FB and the noise occurs in the A150 voltage controlled switch, which is triggered by the A129/2 voiced/unvoiced detector, which is acting on the 606 signal, sending a gate out on ‘unvoiced’ elements – the snare and hi-hats. Effectively this ‘thickens’ bass drum and toms with the FB oscillator and ‘roughens’ snare and hi-hats with coloured noise. 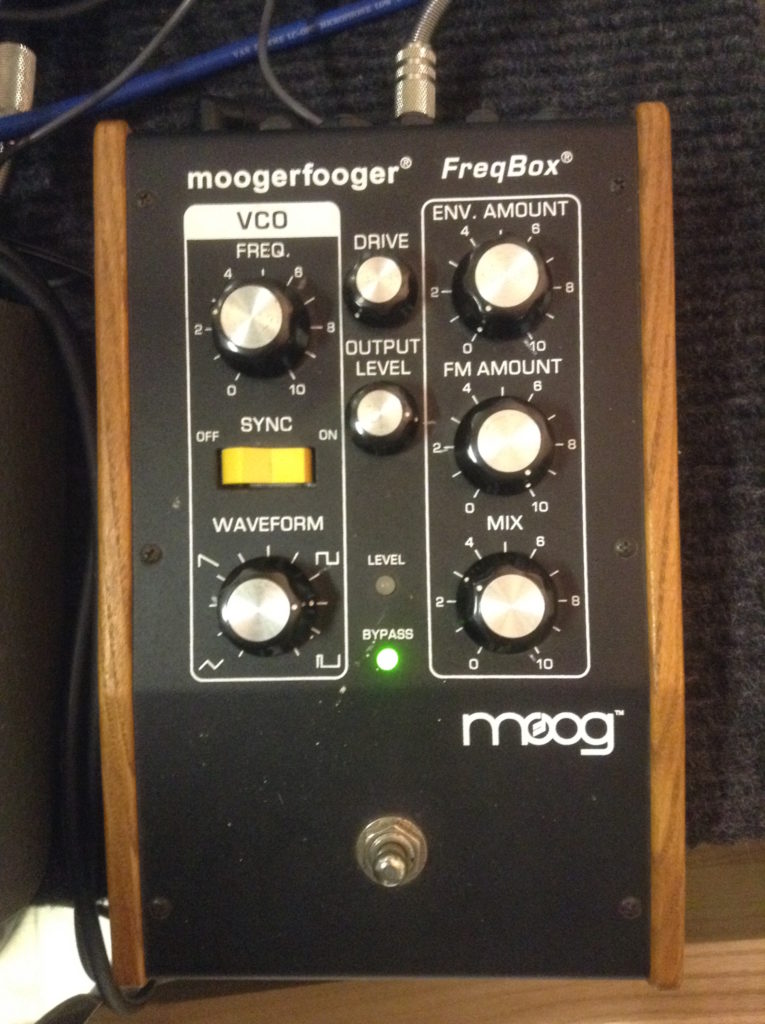 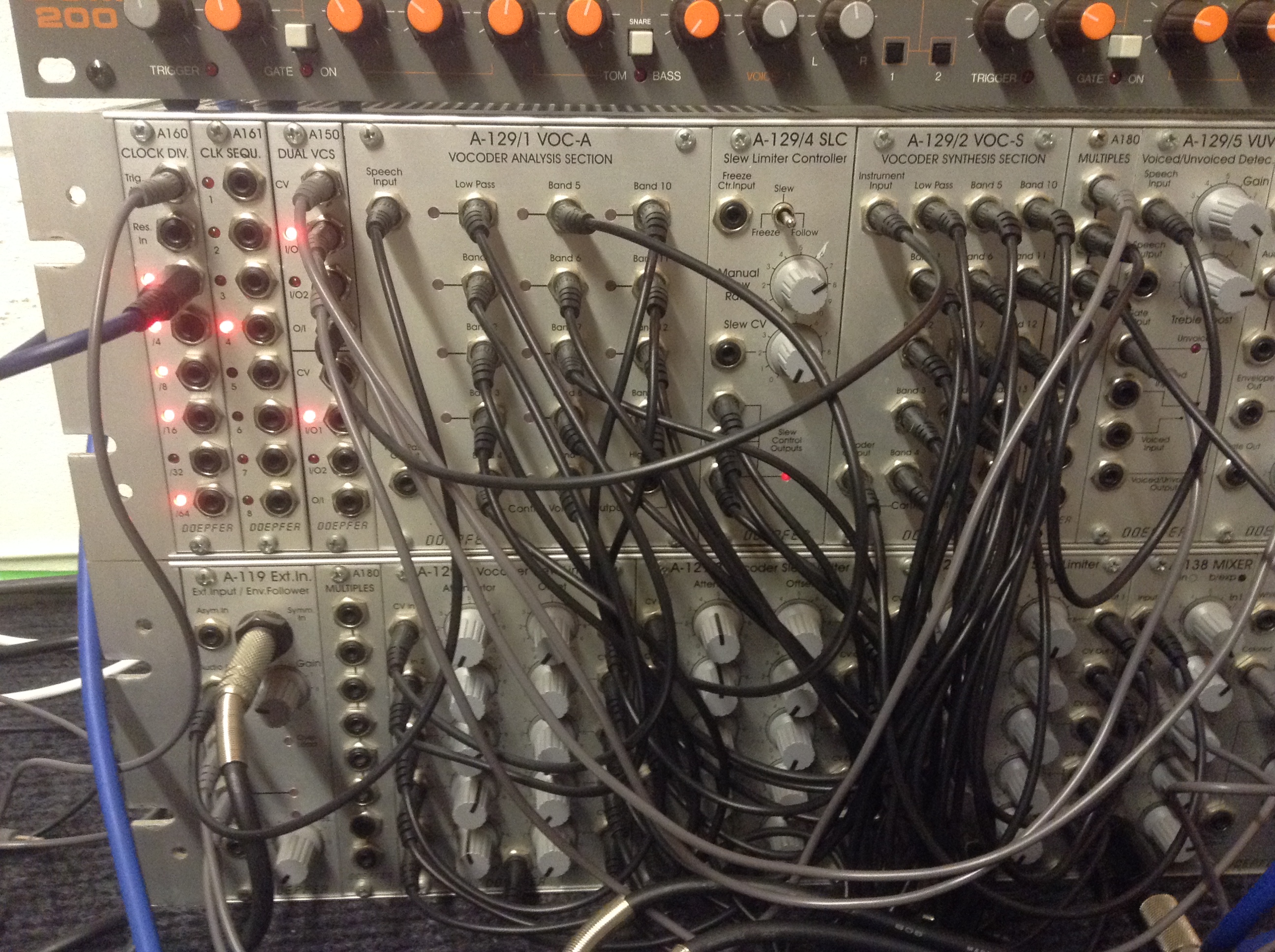 The bass part is played on a Sequential Circuits Pro One monosynth. It is played in one go to TT1.

Recording path:
Pro One to Radial DI to Eisen preamp to mixer (with an EQ boost at 80Hz) to TT1.

This is double tracked left and right to TT5 and 6. This is also where the first bounce of the recording happens, as drum treatments L and R are simultaneously bounced with the uke recordings. Because there is nowhere to drop-in, the uke part had to be played in one go, which was rather difficult. These takes are the last of several attempts.

Recording path:
Sennheiser MKH406T to Eisen preamp to Portico compressor to mixer (with EQ boost at 6k and dip at 400Hz) to subgroup 1 to TT5 (then TT6 for the double track).

Drum treatment L on TT3 (then R on TT4) also sent to subgroup 1 to record with uke.

Getting the balance between the live uke and drum treatments took some experimenting with.

There are now four tracks fixed (1, 2, 5, 6) and four tracks to play with (3, 4, 7, 8). I had to plan very carefully how I went about the next stages, as there were multiple elements to incorporate into these four tracks.

I decided to work towards having one set of BVs on the same track as the toy piano, one set on the same track as the organ, and two separate main vocal tracks. Because I thought the backing vocals far more likely to need drop-ins, these were to be performed first, then bounced with the toy piano (or organ) in one pass. All of this would require multiple recordings and bounces as follows:

These were tracked in the control room. This was so I could sit next to the 80-8 for drop-ins. As I was practicing the BVs a new line came to me – heard around ‘free man in Paris’. This would go on to form quite an important counter melody to various sections.

Note: these videos do not show every instance of actual recording. The recording of BV low 2 is shown thoroughly, and the recording of the other BVs can be assumed to follow the same pattern. BV high 2 is shown cursorily for context.

Recording path:
Electrovoice RE20 to Eisen preamp to Portico compressor  to mixer ( with an EQ boost at 6k). From desk to various tape tracks.

To be recorded while simultaneously bouncing BVs 1 (TT4) to TT7. BVs 1 also to have reverb added during bounce. To keep noise on tape to a minimum I am fading in both toy piano and BVs as they come in. This makes the performance quite tricky, as you can see by the number of drop-ins I have to do.

Judging the balance between toy piano and BVs is very difficult at this stage. Not at all sure I’ve got this right.

Recording path:
Toy piano: Beyerdynamic M260 to Sytek preamp to Portico compressor to mixer (with EQ boost at 6k and 250Hz) to subgroup 1 to TT7

Recording with bounce of BVs 2 (TT8) to TT3. Similar procedure to toy piano.

BVs not muted in this performance, but harmonium is; this is to pull out one of the stops for the second verse, a noisy procedure.

BVs and Biamp reverb as toy piano (though TT8, rather than 4). 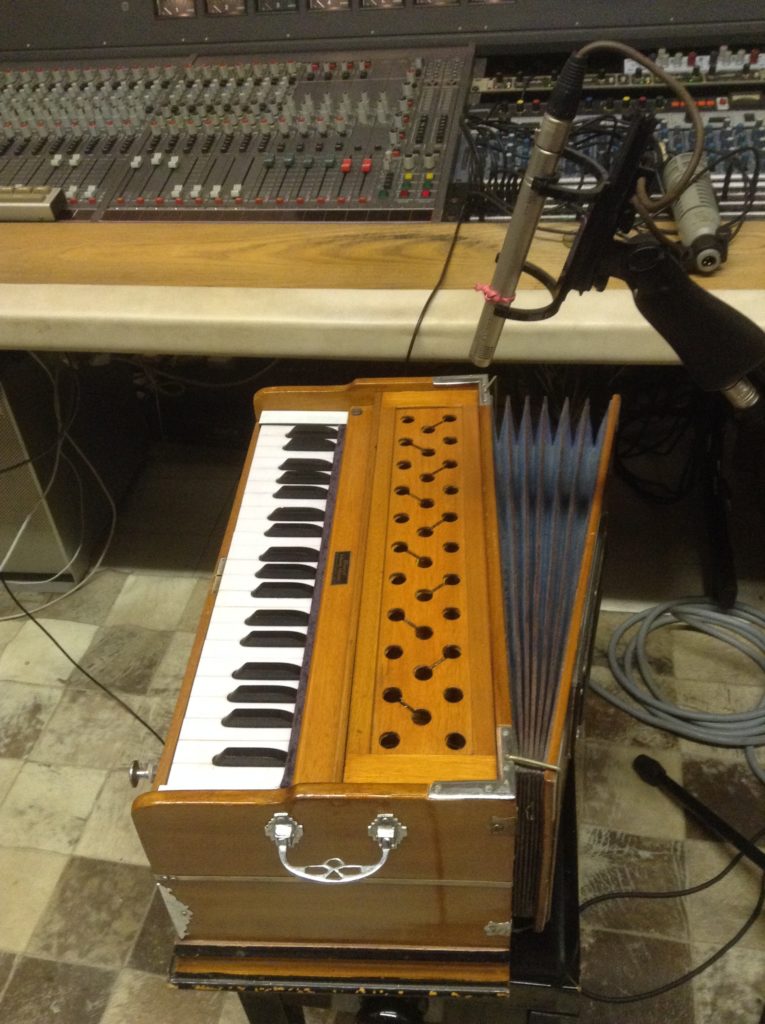 At this point I decided there was a need for one more element. I wrote a new harp part that doubled the new backing vocal part in the instrumental section and augmented some of the other sections, such as the verse two instrumental responses. I would then bounce this with the first main vocal, leaving one track for the final main vocal.

In the video you see me move the harp towards the mic at certain points – a kind of manual pre-automation. This gesture anticipates the tendency for the harp sound to plink and then rapidly disappear from the mix.

The harp also drives a Moog MF-107 FreqBox, which tracks the pitch of the melody and outputs a synthesised version. This is fed through a Moog MF-101 low-pass filter. The cutoff of the filter is modulated by the amplitude of the ukulele part via an envelope follower, which gives a subtle rhythmic wobble to the sound. The harp and the Freqbox are also sent to a Biamp spring reverb.

Harp sent from mixer to Moog FreqBox via subgroup 3

Harp sent to aux 1, which feeds the Biamp spring reverb

FreqBox to Moog filter to mixer to subgroup 1 to TT4

There is no video recording of the first main vocal.

First of double tracked vocals. Recorded simultaneously with bounce of harp on TT4, to TT8. Recorded in the control room with the same procedure as the backing vocals.

Recording path:
Gefell UM70 to SQN4 preamp to Portico compressor (subtle compression) to mixer (EQ boost at 6k and dip at 200Hz) to subgroup 1 to TT8

About half of the song was sung in one take. Then there were various drop-ins. Some drop-ins were not possible, due to the harp bounce, e.g. second verse. In the following picture the asterisks to the right show where I dropped in (the asterisks to the left are drop-ins for the second main vocal). You can see that I only needed to replace two lines from the second verse (from ‘after Mr G Perec’), but because of the harp I had to redo the whole verse. 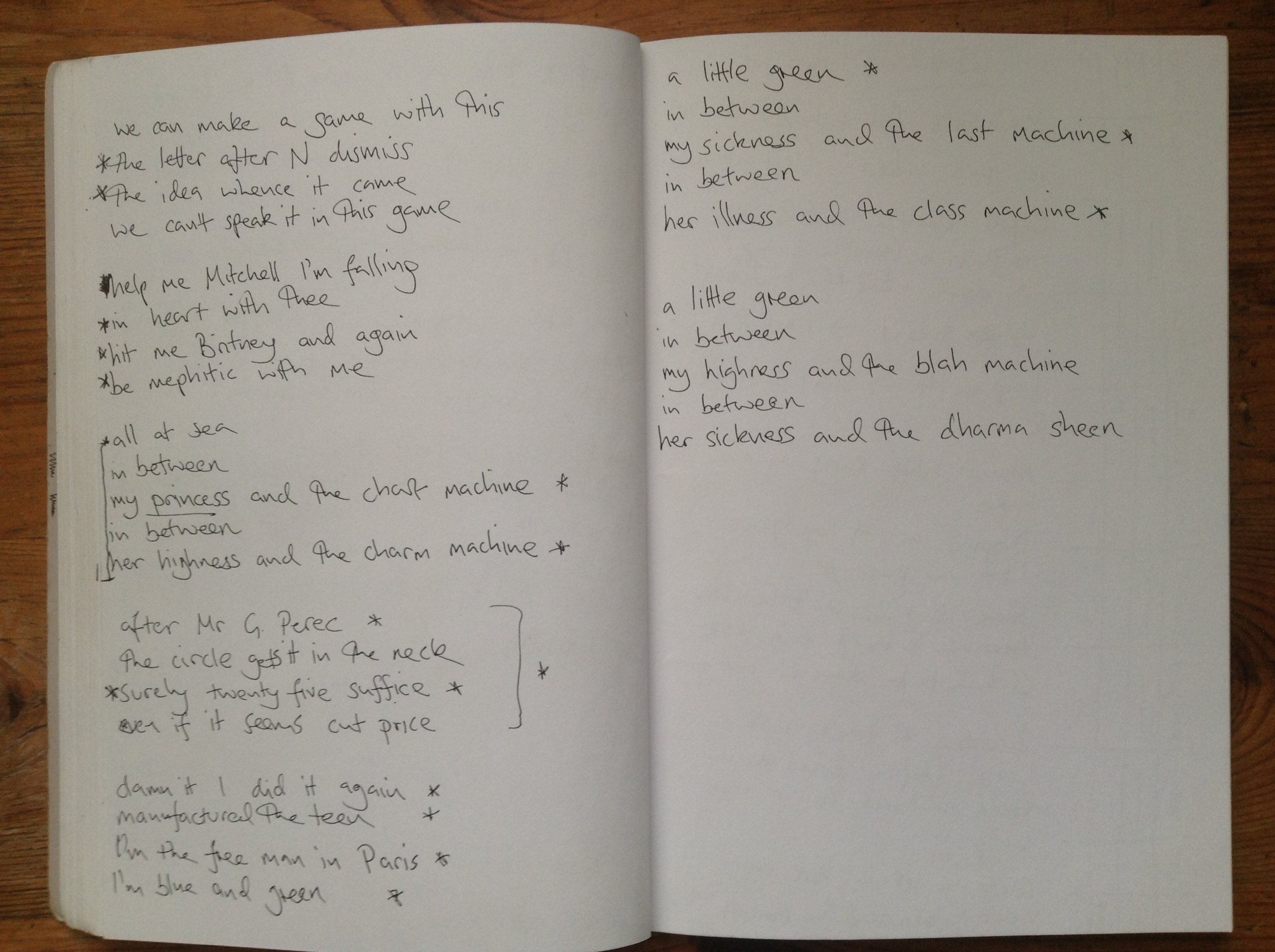 At this point, having lived with the recording for a while, I decided I couldn’t allow the very first of the BVs on the toy piano track to remain (out of tune). Fortunately there isn’t any toy piano playing at this moment, so it is possible to replace the BVs. This involved replacing both high and low BVs, so the high BV was first recorded to TT4, then bounced with the low BV to TT7. I think the RE20 had stopped working in the meantime. This uses a Gefell UM70. I’m not sure of the preamp or further chain.

This replaced BV really doesn’t sound the same as the rest in the final mix. This is a compromise I have to live with.

The second of the double tracked main vocals, recorded to TT4, thus filling the multitrack and completing the recording.

Recording path:
Blue Dragonfly to SQN4 preamp to Portico compressor to desk (EQ boost at 6k, dip at 250Hz) to subgroup 1 to TT4

The drop-ins are indicated in the picture above: left hand side asterisks.

Arrangement decisions can still get made at mixdown, and here, the bass is removed from the first half of the instrumental and then the ukuleles are removed from the second half. Other mutes are mainly to keep the mix as quiet as possible. Fader moves change levels of certain instruments. The whole mix is a performance, and is scored and rehearsed. The feedback path in the auxiliaries is exploited by pushing aux 3 in the instrumental section.

The following table gives settings for the Amek PM01 outboard EQ. Gain settings are given as clock face readings.