The Thing Breathed  is a modular synthesis performance piece. It was performed five times in 2015 and three times in 2018. Venues ranged from a pub in Brighton to the International Conference on Live Interfaces in Porto, Portugal (proceedings from the conference here).

Two of these live performances were well documented:

The second was at an evening of modular synthesis performances called ‘Church of Modular’ at St. Mary’s Church, Brighton, 30th May 2015, organised by Daniel Hignell and me. The sound here, recorded by Phil Bilsby, is a mixture of the output from the front of house mixer and a pair of condenser mics set quite far back in the church. It was mixed by me, with no added reverb.

There is an interesting first-person stream of consciousness reaction to the Church of Modular performance here written by blogger Rachel James. Rachel was also at the first performance of The Thing Breathed, in the pub The Black Dove in Brighton, February 2015. Her review of that, plus an interview with me, is here.

The setup for the piece is detailed below. The performance itself is a search – I’m steering a system I can never fully understand toward zones of sonic interest, discovered in rehearsal and previous performances, burnt into my musical memory, but not always findable. The complex, nested feedback network – where each element is active concurrently in multiple feedback paths – reacts to small changes in knob or parameter settings with often wild lurches of behaviour. Some combinations of settings lead to interesting results. Many don’t. The performance navigates moving from one interesting zone to another in search of compelling listening – a hit and miss affair with a system that is so hard to steer, that resists cognitive penetration, and that is never predictable and often misbehaves. It generally lasts around 20 minutes.

Schematic of the setup 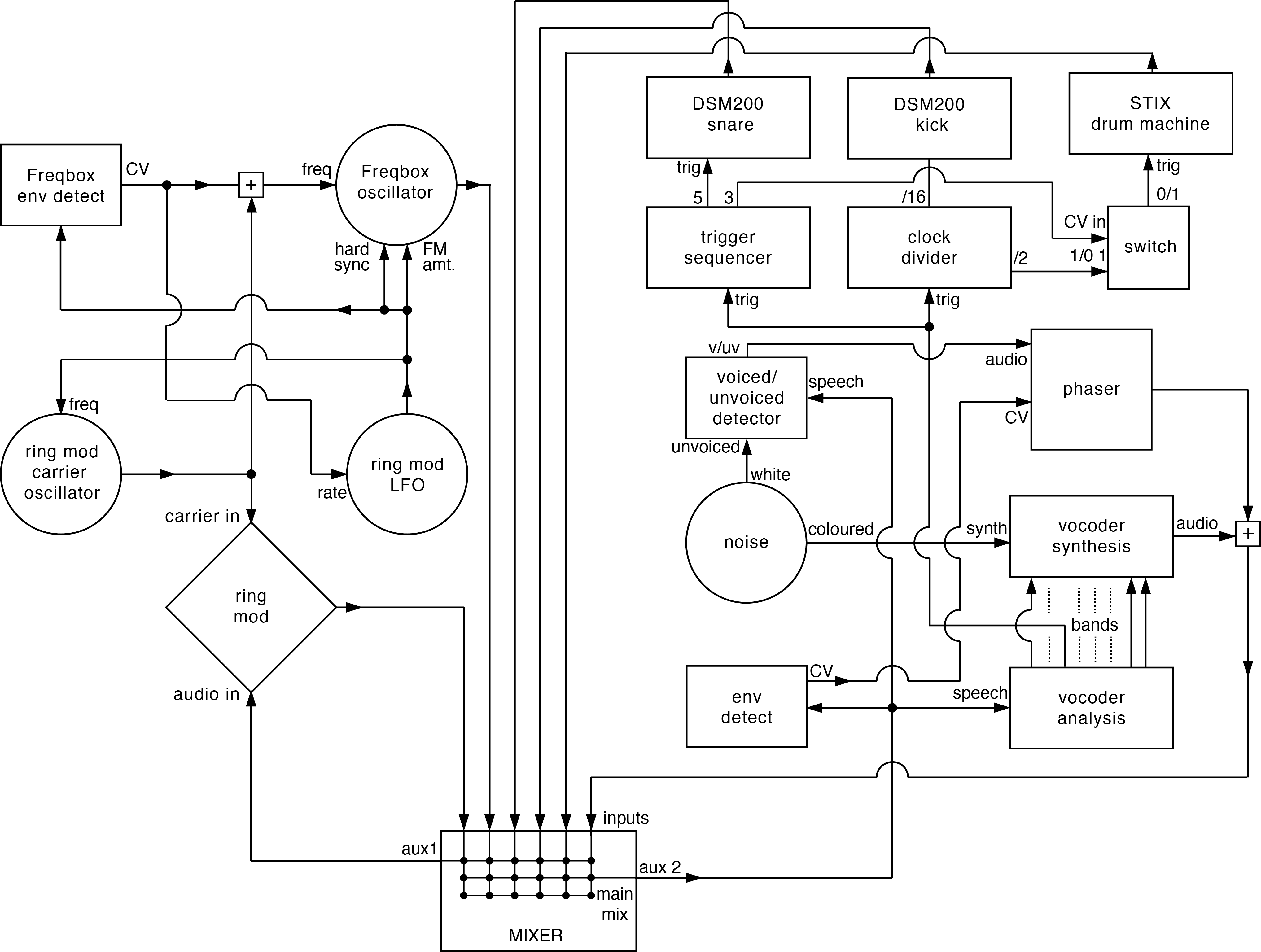 The schematic denotes functional blocks. It is important to note that the 2 auxiliaries, on the mixer, are variable throughout the performance (and in the setup before a performance). It is through the auxiliaries that much of the feedback complexity manifests, since these allow the Doepfer modular (on the right hand side of the schematic) and the ring mod and Freqbox (on the left hand side of the schematic) to interact in unpredictable ways. The three drums machines (at the top of the left hand side of the schematic) are clocked in highly unpredictable ways from one of the bands of the vocoder analysis section, which is itself reacting to the output of aux 2. The usual distinction made in modular systems between audio and control voltage (CV) is collapsed by the multiple interdependent feedback loops.

The ring mod takes its audio in from aux1 on the desk. It ring modulates this signal against its own internal carrier oscillator. The pitch of the carrier oscillator is modulated by the ring mod’s internal LFO, whose rate is modulated by the Freqbox envelope out. The LFO output is also sent to the Freqbox audio in (this is one of the primary feedback loops, and is unusual for sending a CV output into an audio input). 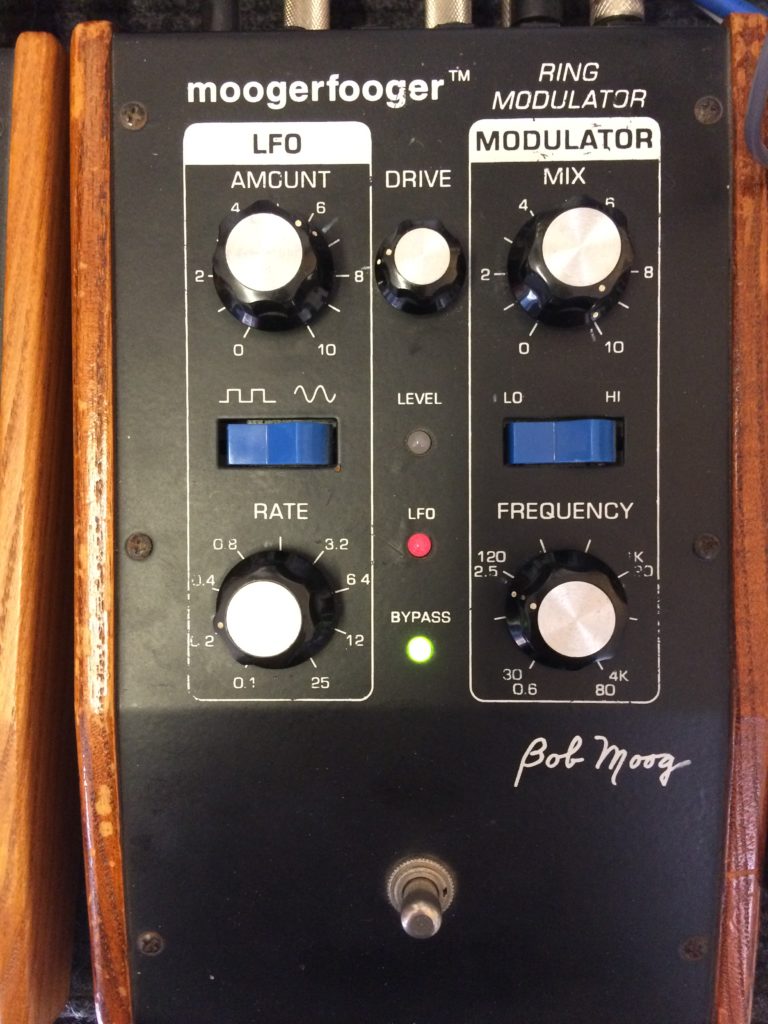 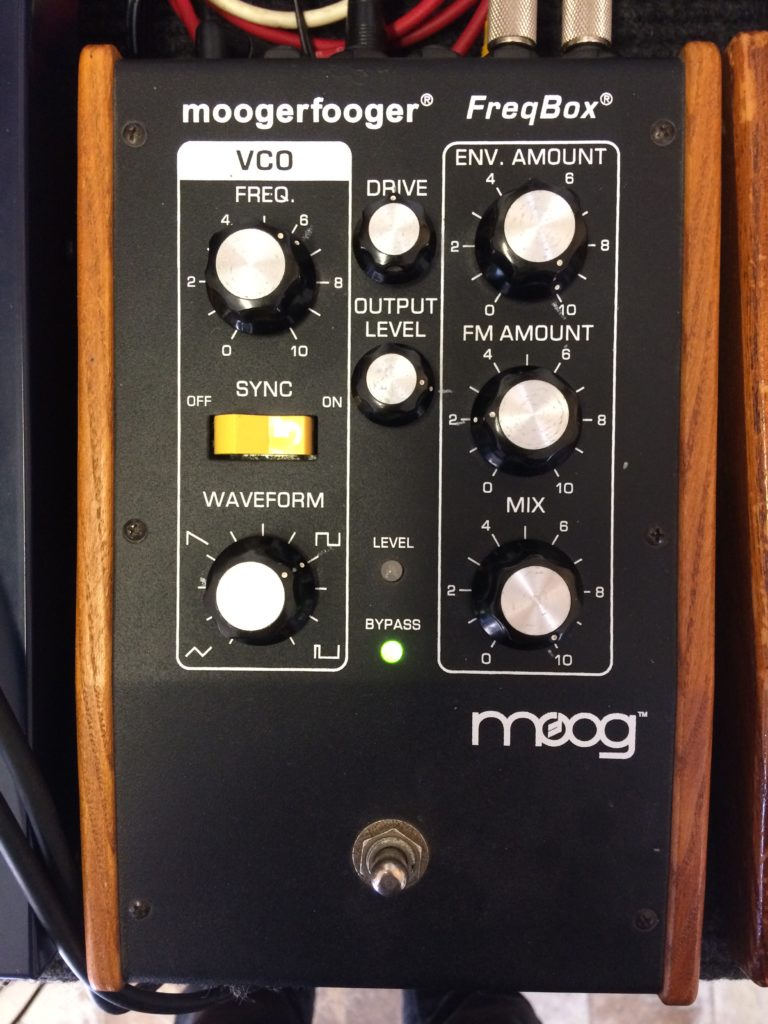 The vocoder is one of the primary elements of the sound of this piece. Its analysis section takes its signal from aux2. Each of its 15 bands outputs a CV depending on the frequency spectrum of the incoming signal (which varies depending on what is being sent to aux2 on the mixer). Band 5 is sent to the A160 and A161 clock modules. The other bands are sent to the synthesis section.

The input to the synthesis section is broadband coloured noise from the A118. This gives rise to various breathing, spluttering and vaguely vocal noise sounds.

This part of the vocoder also takes its input from aux2. It analyses its input for noise elements. When it decides an input is noise it outputs white noise (from the A118) to the A125 phase shifter.

Doepfer A119 External In

This module takes the aux2 signal, passes it to the vocoder analysis and voiced/unvoiced detector, as well as using its envelope follower to track the volume of aux2 and output a CV that goes to the A125 phase shifter’s CV input.

Dynamically changes the timbre of its white noise input by altering the phase of the incoming signal according to its CV input (tracking the volume of aux2). The phase shifted signal mixes with the original signal. This technique is borrowed from Nicolas Collins’ piece Pea Soup.

Takes its unusual clock sources from vocoder analysis band 5. Step 3 feeds the A150 CV in. Step 5 triggers the DSM200 snare.

This switch is used to trigger the STIX drum machine. It sends a trigger when it receives simultaneous signals at its CV and I/0 1 inputs. Again, this is highly unpredictable.

Mixes the signals from the vocoder synthesis module and the phase shifter. There are volume controls for both inputs. 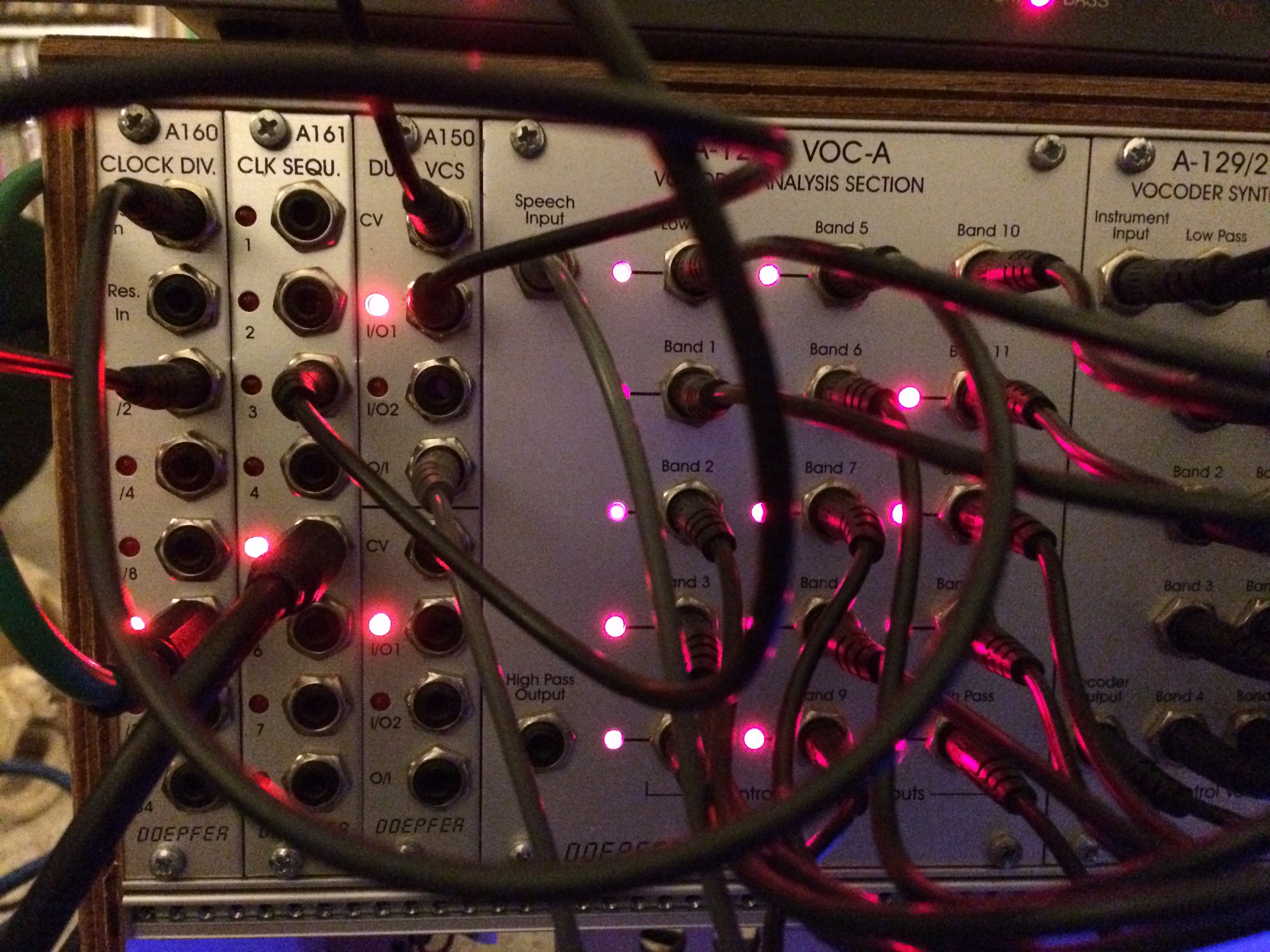 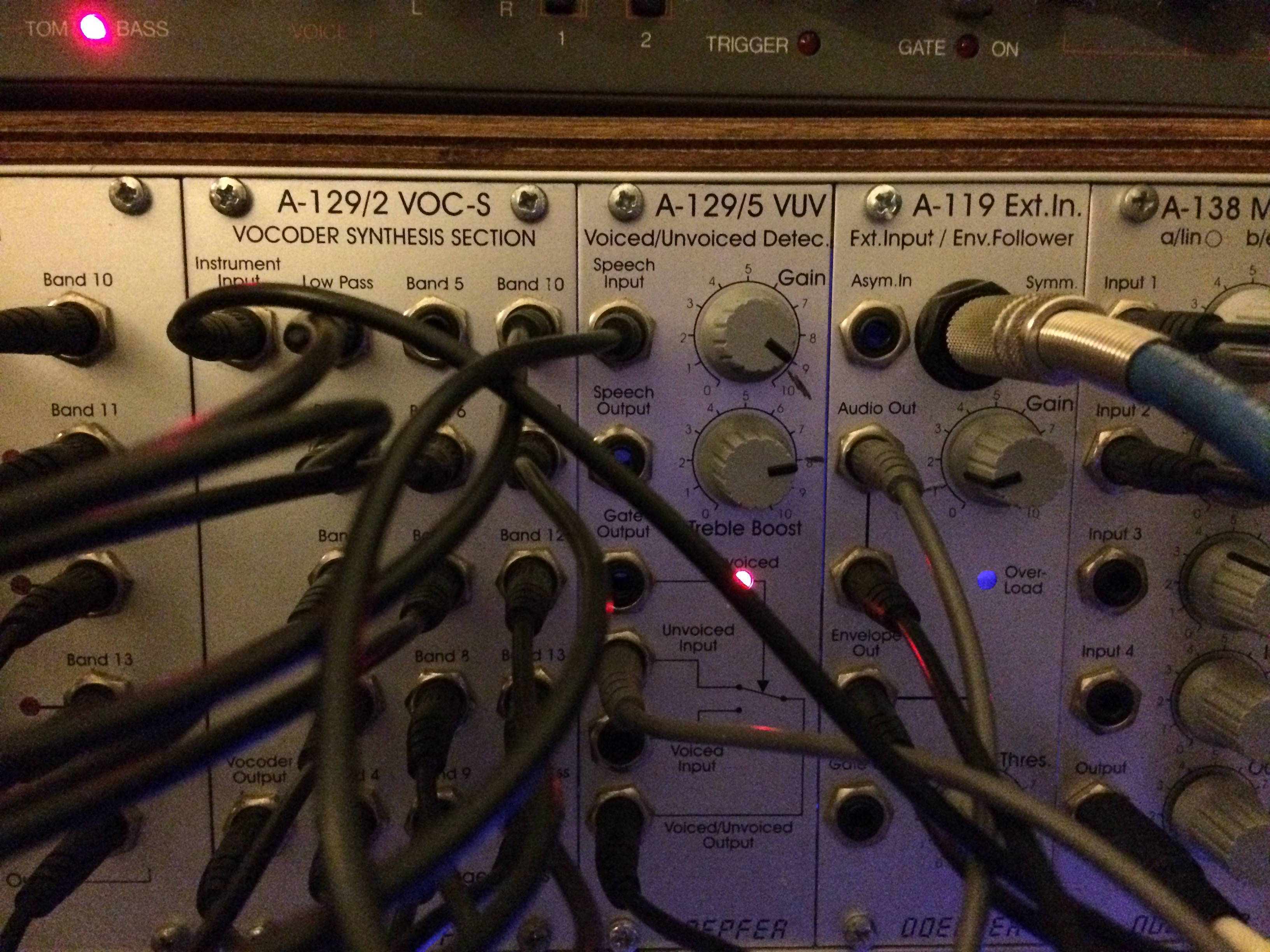 A dull snareish sound, triggered by the A160.

A very hefty, full-blooded kick sound. I play with the release control to range from tight kicks to low frequency pitch sweeps.

Triggered in an unpredictable way by the A150. This programmable drum machine outputs various snare, kick, tom and cymbal sounds. It steps through its pattern according to the trigger and sometimes stops on a sound which outputs continuously until the next trigger. It seems very sensitive, and sometimes I tap the box which seems to change its behaviour. How fully the batteries are charged also makes a difference to how it sounds and how it behaves. 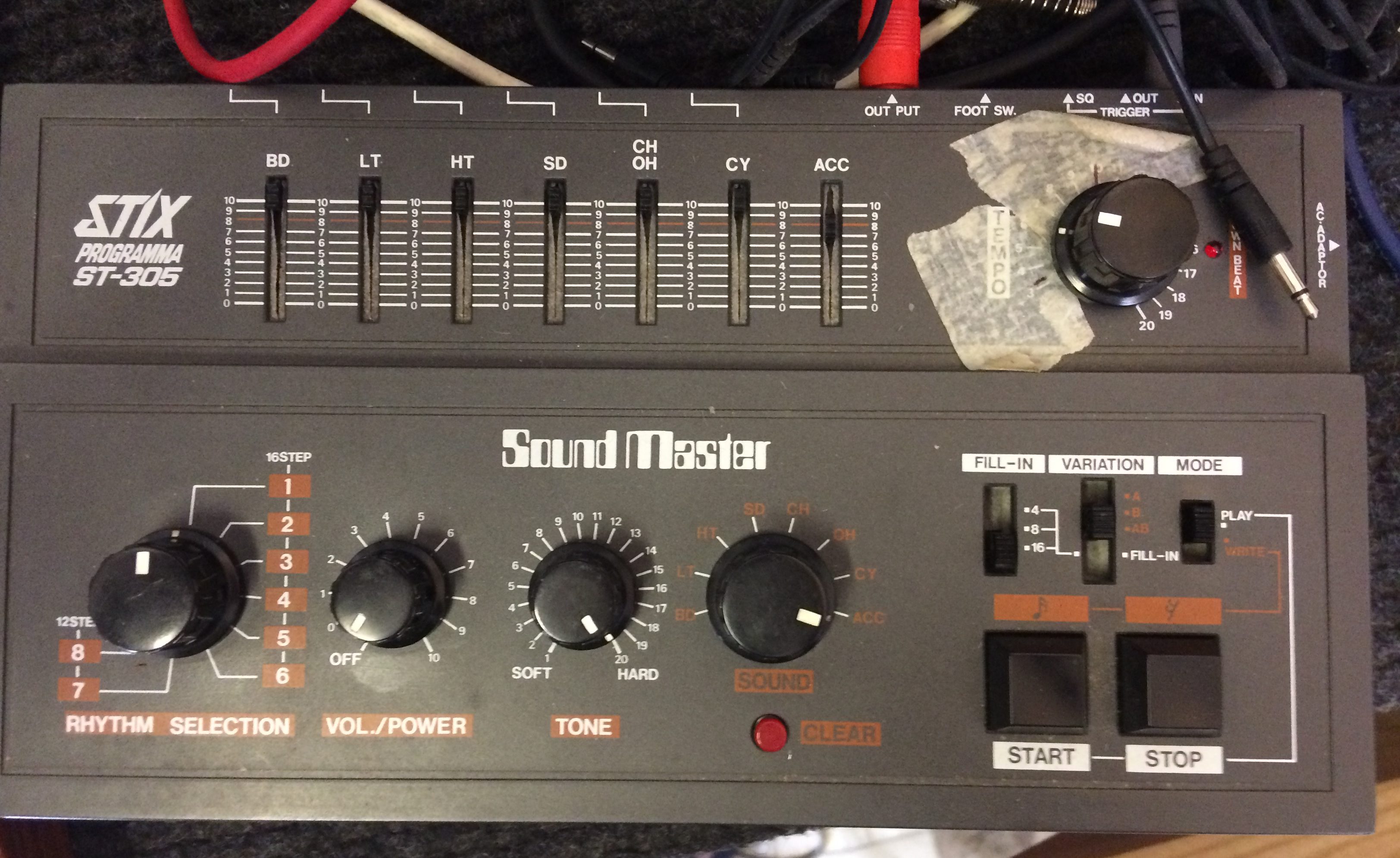 Allows level and panning control of its 6 inputs, which it can also send in varying amounts to its 2 auxiliaries. The main mix output goes to the front of house speakers. 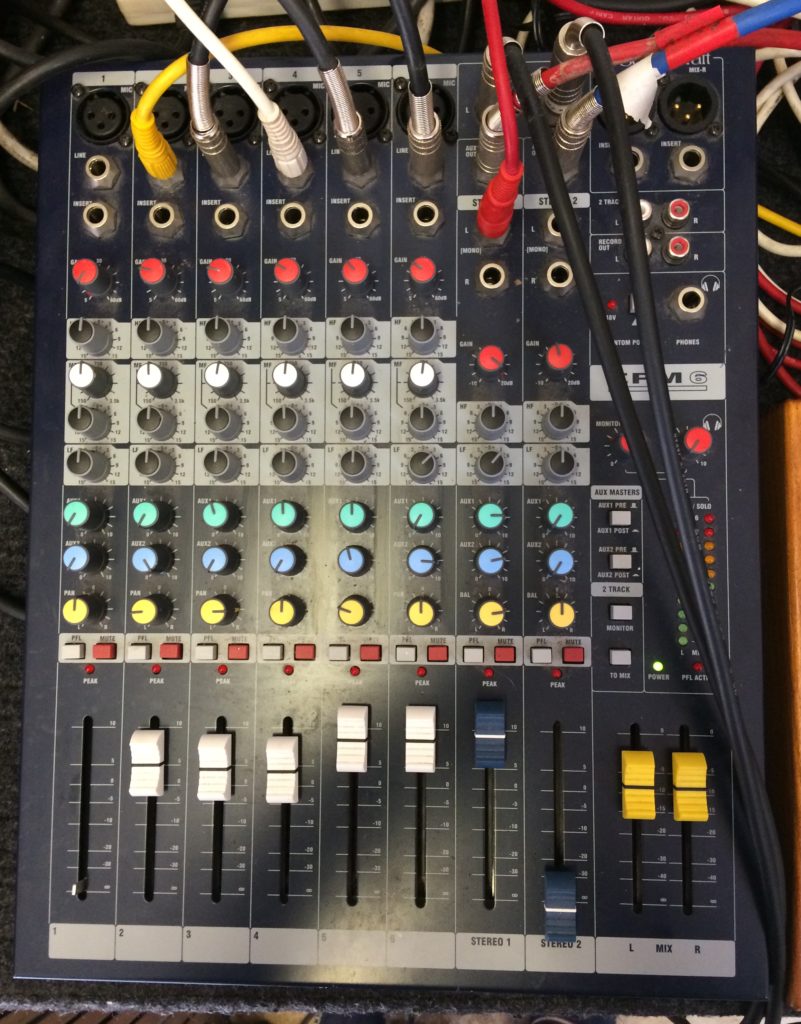